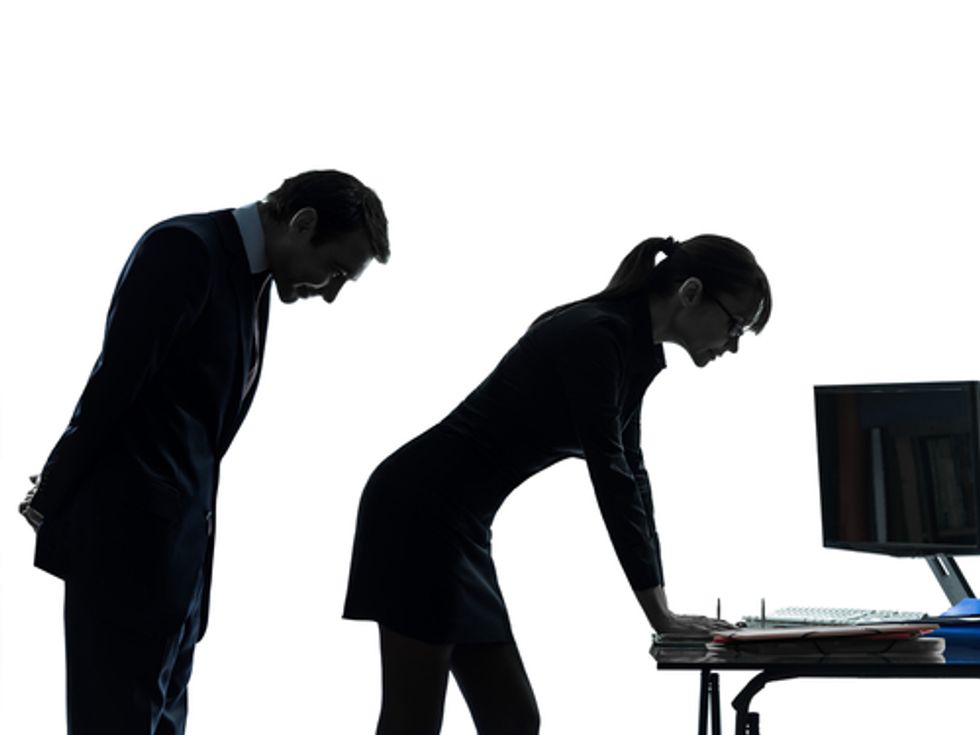 Just ask yourself: What would Paul Newman do? He would definitely stare at her ass like it's hypnotizing him.

I was going to ignore Patrick Howley, the Daily Caller twerp who wrote this paranoid piece claiming liberals want to ban men from even looking at women's bodies. It was a highly unoriginal piece of misogynist propaganda, complete with all the tropes common to defenses of street harassment: Claiming it's a "compliment", conflating open leering with surreptitious glances, and, of course, claiming that women actually like being harassed by strangers pretending to compliment them, an activity that Howley sounds awfully familiar with. But then Howley had to go on Sam Seder's show and dig himself in even deeper, and okay, I'll take the bait.

Starting around 25:00, they start debating whether or not women like being harassed on the street. Howley sticks to his "it's a compliment" line, though he wavers a bit when Sam asks if he's saying that women like having some dude yell "nice tits" at them. But it's his line and he's sticking to it, which leads to this exchange:

SAM: Have you seen a lot of women....that have said, "Thank god Patrick has stuck up for us, because we were getting worried that all this ogling was going to go away?" I mean, where are these women that are supporting this? Because you're talking to women now. I'm sure you want to tell us something you can link to.

PATRICK: Well, I believe in Nixon's idea of a "silent majority". And I think a lot of people, women and men, are tired of an activist media deciding what is and what is not offensive. I think a lot of women met their significant other* through a situation that would be defined by the progressive movement as offensive.

Thanks for clearing that up, Patrick. Clearly, you are correct and the silent majority of women do not see having some dude leering at your breasts as rude at intrusive. Indeed, he is husband material, and you know how women are about getting married. How do we know women believe this, since women don't actually say that they love being leered at? Because Patrick Howley knows women. He knows them better than they know themselves.

After all, look at all the great heartthrob icons that have caused women to swoon in the past 100 years or so.  James Dean. Paul Newman. Steve McQueen. Harrison Ford. Denzel Washington. Jon Hamm. What do these men have in common? One thing: They know that women hate a man who knows how to be cool. They would never do anything so crass and feminazi-ish like gaze into a woman's eyes, banter with a woman, or slowly let the sexual tension rise during conversation. Instead, they invented these killer moves that are surefire winners with the ladies:

So there you have it, folks. Patrick Howley blew the whole lid off it. Feminist objections to street harassment are not about making our streets as pleasant a place for women as for men. They are an attempt to keep you from getting laid by taking away the most potent tool out of your toolbox, hollering at strange women on the street. Without it, babies would never get made and panties would never lay on floors, tossed carelessly aside. So, remember, fellows: If you want to get laid, whatever you do, don't be calm and respectful and definitely, definitely, do not act cool. Learn from these Hollywood icons and remember, what women really like is when you act like you've never seen a woman before. Gets 'em every time.

*So, home-schooled, right? Has to have been. Though, to be fair, I was convinced after I saw this tweet:

"Rape culture" is a term that often has nothing to do with rape. It's a smear for the sports, beer culture that libs hate/don't understand

Updated to add this gif of Cary Grant, showing how to look ridiculously sexy by giving you an open-mouthed leer, which is always and forever charming:

Oh, wait. He's not doing that. Huh. Maybe I should rethink this.