It's official: Uruguay legalizes production and sale of cannabis 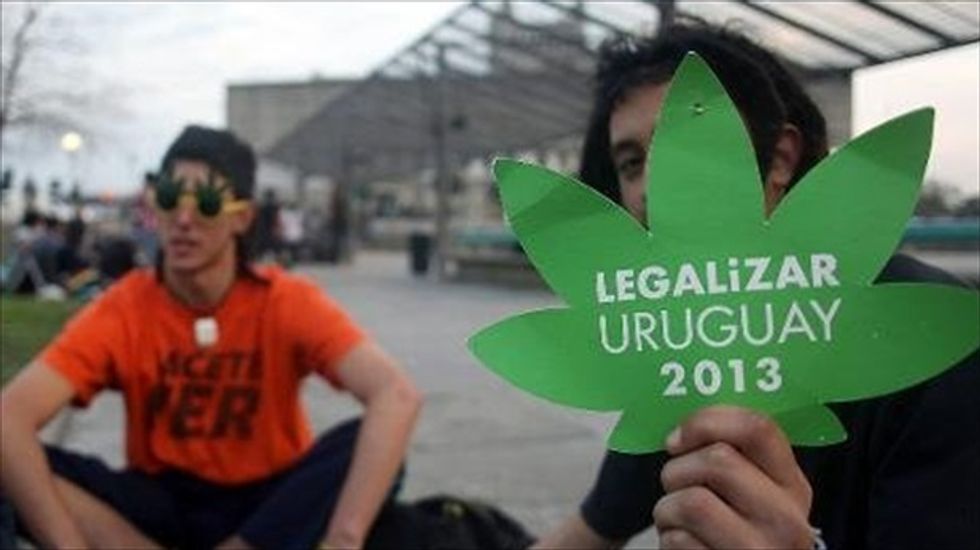 Youngsters wait outside the Parliament building (background) while lawmakers debate the bill legalizing marijuana, in Montevideo, on July 31, 2013 [AFP]

The world's most far-reaching cannabis law was passed by the Uruguayan parliament, opening the way for the state to regulate the production, distribution, sale and consumption of the planet's favourite illegal drug.

The law, effective from next year, will: allow registered users to buy up to 40g of marijuana a month from a chemist's; registered growers to keep up to six plants; and cannabis clubs to have up to 45 members and cultivate as many as 99 plants.

A government-run cannabis institute will set the price – initially likely to be close to the current black market rate of $1 a gramme – and monitor the impact of the programme, which aims to bring the industry under state control and push illegal traffickers out of business.

Julio Bango, one of the politicians who helped draft the bill, said it would probably be four months until the first harvest of legal cannabis, by which time the government would have a licensing system in place. "We know this has generated an international debate and we hope it brings another element to discussions about a model [the war on drugs] that has totally failed and that has generated the opposite results from what it set out to achieve."

Before the passage of the bill, president José Mujica called on the international community to assist in what he admitted was an experiment aimed at finding an alternative to the deadly and unsuccessful war on drugs. "We are asking the world to help us with this experience, which will allow the adoption of a social and political experiment to face a serious problem – drug trafficking," he said earlier this month. "The effects of drug trafficking are worse than those of the drugs themselves."

If the results of the law prove negative, Mujica has said it could be rescinded. The current illegal market in Uruguay is estimated to be worth $30m (£18m) a year, according to Martin Fernández, a lawyer working for the Association of Cannabis Studies, who says one in five Uruguayans have tried marijuana. The government estimates 115,000 people are regular users.

Consumption of marijuana has been permitted for many years in Uruguay – one of Latin America's most tolerant nations – but production and sales are prohibited and largely run by gangs who smuggle drugs in from Paraguay.

The government is taking a political risk by trying to regulate the business – a move not supported by most voters. Opposition politicians have demanded a referendum.

"Public perception, reflected in public opinion polls, is that this measure is the wrong way to address a serious problem," Gerardo Amarilla of the National party said.

Drug rehab workers have mixed views about the likely risks and benefits. Nancy Alonso, a psychologists who runs an addiction treatment centre, believes the law will create social and health problems.

"Marijuana is highly addictive. It's 15 times more carcinogenic than tobacco. It produces psychological disorders like depression, anxiety and – for big consumers – schizophrenia," she said. "As a healthcare agent, I think the social harm will be huge."

However, staff at the government-funded Crudadela treatment centre are more upbeat. "I think the law is a positive step," said Pablo Anzalone, a programme co-ordinator. "State regulation will reduce problematic consumption. We also hope that it will generate more money for us and other treatment centres."

Growers were ecstatic that their pastime will no longer get them thrown in jail. To celebrate, several planned what they called "a final march with illegal cannabis" through the streets of Montevideo.

Marcelo Vazquez said he now had the opportunity to fulfil an ambition. "It's a utopia," he said. "I want to work, pay taxes and grow cannabis for clubs, for medicine, for whatever."

Juan Guano, who runs a small shop selling growbags, heat lamps and books on cannabis cultivation, said he expected his market to expand. More hopefully, he predicted the measure could help Uruguayan and world society.

"Uruguay doesn't need to prove anything to anyone, but obviously the outside world will be watching how this works. We are not regulating marijuana with the aim of encouraging others to follow our lead, we are doing it because this is what we need as a society. But one possible positive is that, if things go well, other countries in the region could take this as a model for marijuana regulation."