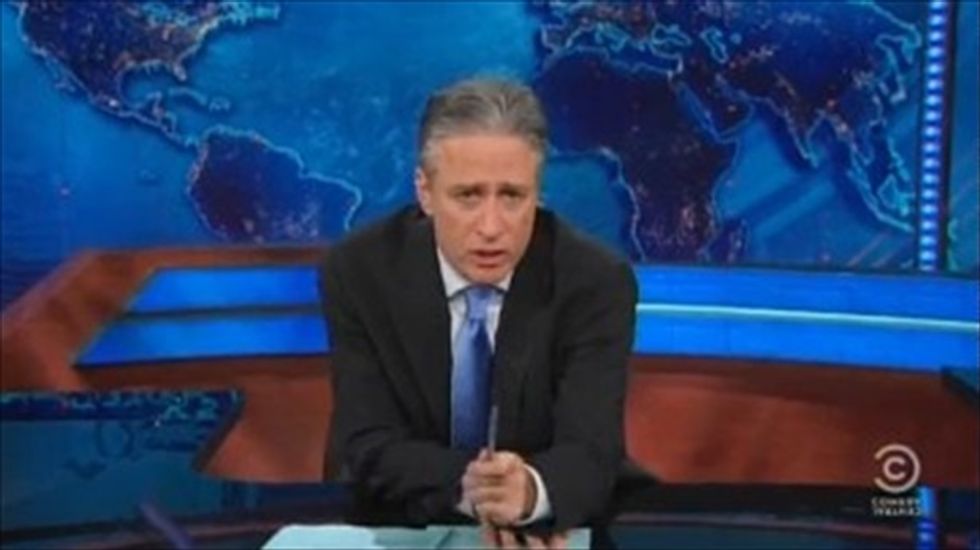 Jon Stewart waded into the "war on Christmas" on The Daily Show on Tuesday, mocking conservative personalities like Bill O'Reilly, who was driven to ask "what holiday is Santa celebrating?" after seeing a Macy's ad depicting Santa Claus helping customers with a "holiday gift list," as opposed to a Christmas gift list.

"That is a good question," Stewart said sarcastically. "Santa, or Sinterklass, is celebrating the Feast of Saint Nicholas, which originated in the Netherlands in the Middle Ages and occurs every December 6th. But you might not have heard about that because like every other December holiday, it was long ago sucked into the insatiable black hole that is Christmas."

Besides dinging him for complaining Macy's wasn't "invoking Christ's name enough" during the season ("I thought Christians used to complain that the holidays are getting commercialized"), Stewart also shot down O'Reilly's attempt to assert that the phrase "Happy holidays" did not apply this year because there were no holidays between Hannukah and Christmas.

"Apparently you can't include anything past Christmas, like Kwanzaa, Epiphany or New Year's," Stewart said. "Although by that logic, it means that up until Hannukah, you can only say, 'Happy Hannukah,' but who the f*ck cares about that?"

Stewart also took on another Fox News favorite, former Alaska Gov. Sarah Palin, showing her avoid a question about government displays of the Christian faith during the season by telling CNN -- while promoting her own Christmas book -- that she teaches her children about Judaism by having a Menorah out all month.

"Quick word to the Palin kids," Stewart advised. "While I appreciate the gesture, Jews don't actually just leave a Menorah out for the month of December, like a knick-knack in a curio case."

Watch Stewart call Palin and O'Reilly out, as posted by Crooks & Liars on Tuesday, below.

Twelve murders have taken place at a displaced camp in northeast Syria in just over two weeks, the UN said Thursday, sounding the alarm over an "increasingly untenable" security situation.

Held by Kurdish forces, Al-Hol camp -- Syria's biggest -- holds almost 62,000 people, of whom more than 80 percent are women and children, including Syrians, Iraqis and thousands from as far afield as Europe and Asia.

The Pacific Northwest region emerged as a hotbed of demonstrations last year, but any hopes that the end of Donald Trump's term in office would quickly halt violent unrest tied to far-left groups were dashed Wednesday