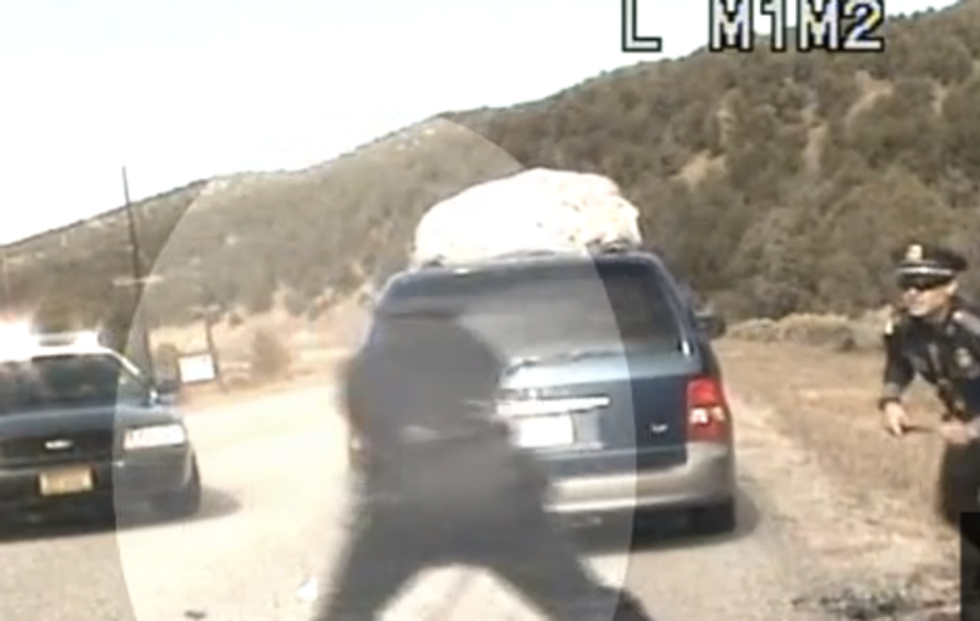 A New Mexico police officer who shot at a van loaded with children in October has been fired from his job.

According to CBS News, a spokesman for the New Mexico State Police confirmed Friday that Officer Elias Montoya was stripped of his badge on Friday after a disciplinary hearing headed by State Police Chief Pete Kassetas.

At a press conference on Friday, State Police spokesperson Lt. Emmanuel Gutierrez told reporters that Montoya's termination would be effective as of 5:00 p.m. that day. Montoya, a 12-year veteran of the force, has 30 days to appeal the firing.

In October, Montoya opened fire on a minivan at a chaotic traffic stop outside the town of Taos, NM.

On October 28, an officer stopped African-American driver Oriana Ferrell for speeding, saying that she was going 71 miles per hour in a 55 zone. During the traffic stop, Ferrell -- who was taking the kids on a family vacation from Tennessee -- panicked and drove away, fearing for the safety of her five children from the white officer.

The officer pulled Ferrell over again and attempted to physically wrest her from behind the wheel. The confrontation escalated when Ferrell's 14-year-old son got into a tussle with the arresting officer, who attempted to use a taser against the boy.

Then, just as police reinforcements arrived, Ferrell and the children attempted to flee a second time, just as one officer broke out the minivan's passenger window with his baton.

As the van pulled away with officers shouting and Ferrell and the children screaming, Officer Montoya fired three shots into the vehicle. Luckily, no one was hurt.

Police arrested Ferrell and charged her with child abuse, fleeing an officer and possession of drug paraphernalia for a pair of marijuana pipes that were found in the van. Her 14-year-old son was charged with battery and taken into juvenile custody. The other four children were handed over to New Mexico's Children, Youth and Families Department.

Ferrell has since been released on bond, but was forced to surrender custody of her children to another family pending the outcome of her case in New Mexico.

The Taos News reported that her attorney Alan Maestas objected to the inclusion of child abuse in the charges against his client.

“She was flat-out scared that something was going to happen to her children,” said Maestas. “We ought to talk about the stupidity and recklessness of shooting at a car that has five children in it.”

“If someone ought to be charged with child abuse, it ought to be the New Mexico State Police,” he said.

Watch video of the traffic stop, embedded below via CBS News: