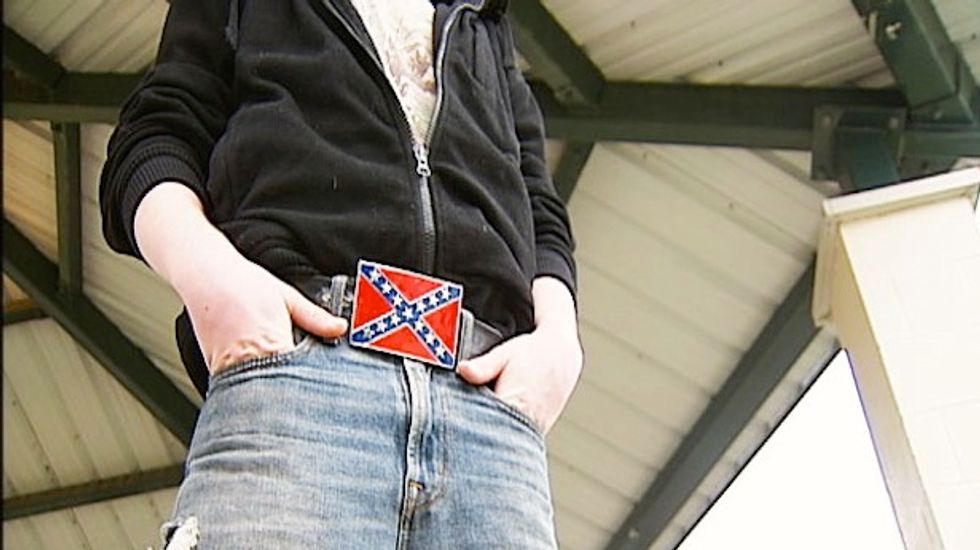 A southwest Ohio teenager could be disciplined if he doesn’t stop wearing his Confederate flag belt buckle to school.

Cody Long said he started wearing the belt to Mason High School after the friend who’d given it to him died.

Other students noticed the large buckle, and some were upset by it.

"I don't like to pick fights that much,” Long said. “I am not one to start them, but I am one to finish it.”

School officials suspended Long after a fight over his belt buckle, and his mother said administrators told him he couldn’t wear the buckle if he wanted to attend the school.

But Tammy Long said that was unfair to her son.

"Just because you are offended by something, doesn't meant you have to stop someone else from using it," Tammy Long said.

The school’s dress code specifically states that clothing and grooming must not be disruptive to the teaching or learning process.

"We are committed to making sure that each one of our students feels safe and eager to come to school,” school officials said in a statement. “For that reason, we have a code that outlines the way that students and staff should dress so that distractions are minimized and we have a positive learning environment."

Mason is an affluent town of about 30,000 people 15 miles north of Cincinnati, and it’s about 85 percent white, about 9 percent Asian and about 3 percent each black or Hispanic.

Tammy Long said her son doesn’t wear the buckle to show hatred for anyone, but simply as a tribute to his late friend and as a symbol of his individuality and belief in personal freedom.

"He won't be 'him' if someone continues to tell us how to be and how to dress and how to act," Tammy Long said.