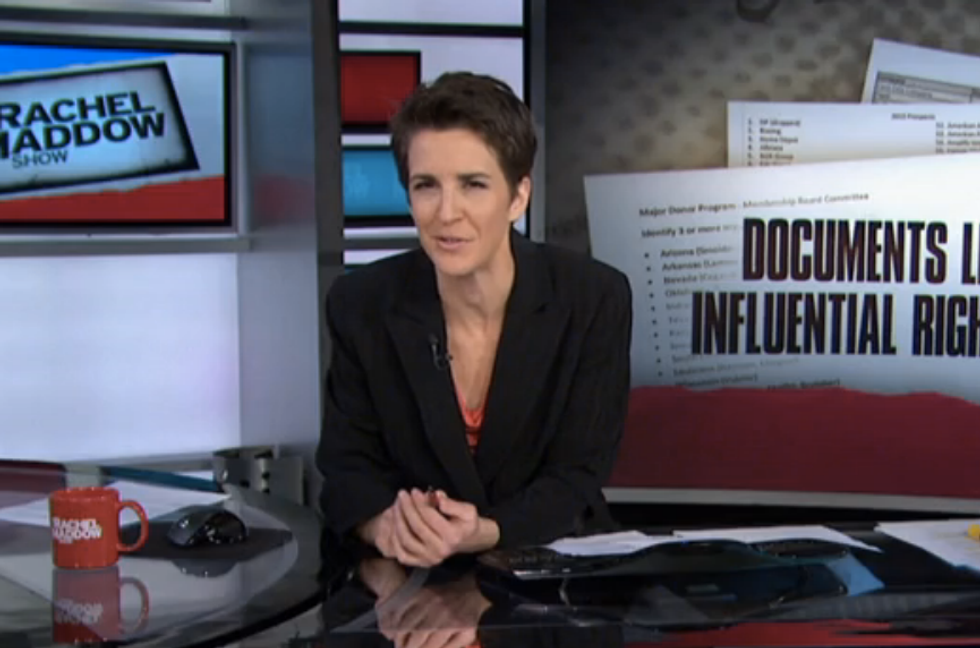 ALEC reportedly took heavy losses in the wake of the Trayvon Martin case and is now desperate to lure back the big donors that abandoned it, promising to restructure in a way that will allow corporations to donate anonymously.

Maddow began the segment by discussing the solar panels President Barack Obama has installed on the White House roof and the effort by ALEC to punish people for using renewable energy.

ALEC crafts laws to shop to conservative lawmakers who then take these laws back to their districts and attempt to implement them. Among this year's proposals is a punitive fee, a stealth "tax" on homes that use solar energy, so-called "freerider" homes.

"ALEC's stated objectives for 2014," Maddow said, "include a new focus on blocking renewable energy initiatives in the states and at the federal level."

U.K. newspaper the Guardian obtained the ALEC memos, which show that the group has been deprived of its key asset, secrecy, since the Trayvon Martin case revealed its role in crafting "stand your ground" laws nationwide.

As corporations ran from ALEC in droves, the group lost more than a third of its annual income. The group began the so-called "Prodigal Son Project" to attempt to woo back its big member donors. ALEC is also taking measures to assure those companies anonymity when they do return.

"There's one thing that corporations like less than taxes and regulations," he continued, "and that's bad publicity. And that's the story of the Trayvon Martin fallout."

ALEC vehemently denies that it is a lobbyist group, however.

"There's a huge gray area in America about lobbying," Pilkington explained. "And I think that's going to become more and more important. Last week, Obama flagged it up. They said they're not going to allow lobbying for groups like Karl Rove's group that actively do electioneering, that do TV advertising."

"Now, ALEC doesn't do that," Pilkington said. The organization doesn't dirty its hands with getting people elected. It writes laws for them after they're elected.