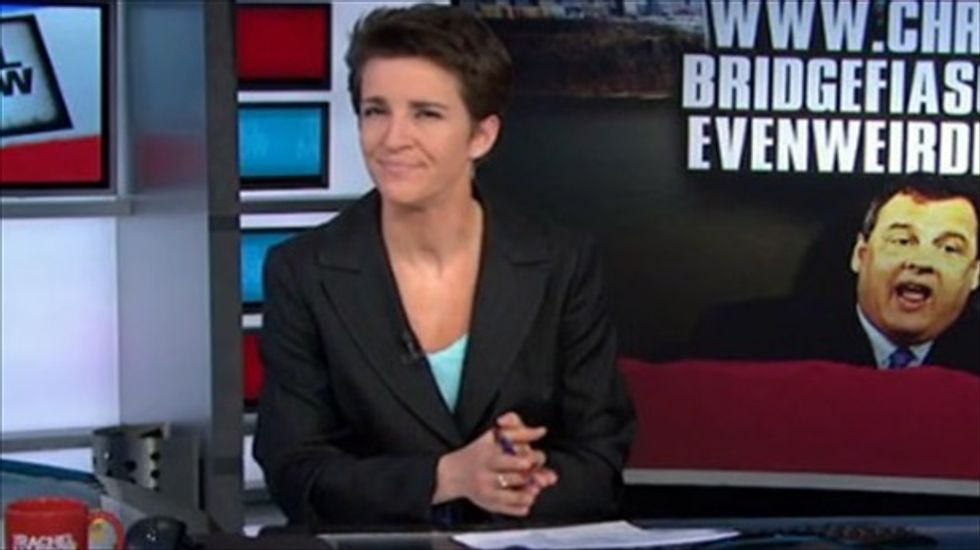 Not only did a high school friend of New Jersey Gov. Chris Christie (R) lack both a resume and a job description for work at the center of a political mystery, MSNBC host Rachel Maddow said on Monday, but the man has become a nuisance for people reporting on his suspected activities.

"Something rotten and vindictive and petty has been going on in New Jersey," Maddow said.

Maddow explained that David Wildstein, who resigned on Dec. 6 after being revealed as the person who ordered the suspicious closing of two lanes on the George Washington Bridge in September 2013, was paid more than $150,000 a year to serve as Christie's "director of interstate capital projects" at the Port Authority of New York and New Jersey, a position that had no job description attached.

The New Jersey Star-Ledger reported that no resume for Wildstein was turned over by the Port Authority in response to a Freedom of Information request filed by the newspaper for state employees in Wildstein's salary range.

Speculation has mounted that Wildstein's order was a rebuke to the Mayor of Fort Lee, New Jersey, Mark Sokolich (D) after Sokolich refused to endorse Christie during his recent re-election campaign. The move strangled traffic in Fort Lee for nearly a week.

Maddow also pointed out that Wildstein has bought and registered more than 50 internet domain names, many of them named after people who have reported on him or the investigation into his actions, and even other Port Authority officials -- a legal, though annoying practice known as "cyber-squatting."

"Governor Christie has been insistent from the begining that the idea that this was political retribution is just a ludicrous idea," Maddow said. "I mean, can you imagine, someone in the Chris Christie administration being so petty just over politics? Can you imagine that kind of a petty, vindictive, nasty little abuse of power? Can you imagine it? It's getting easier to imagine now."

Watch Maddow's commentary, as aired Monday on MSNBC, below.