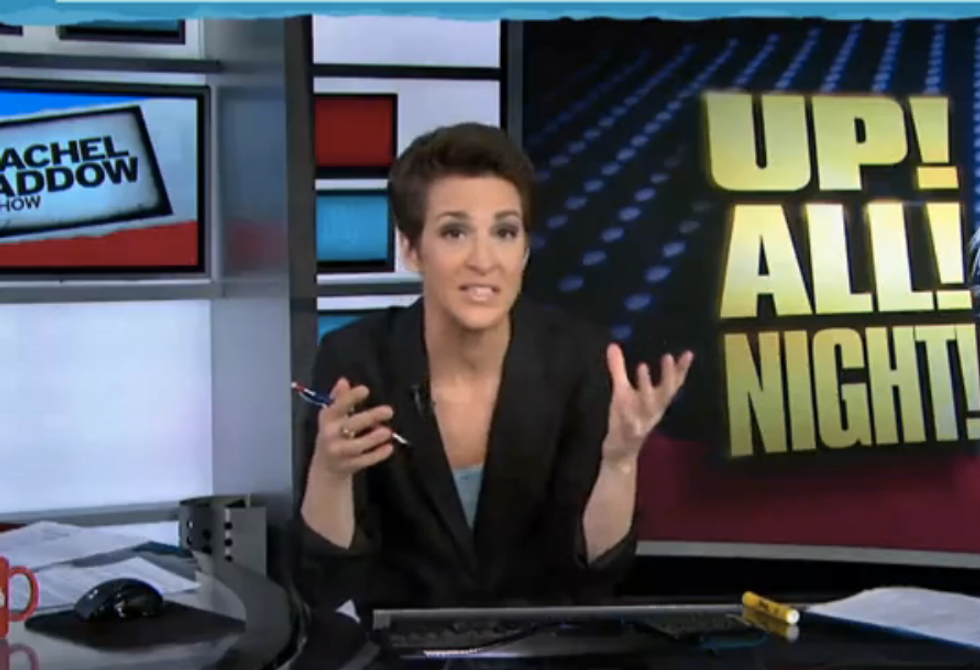 No matter how bad it seems for Democrats right now, said Rachel Maddow on her show Wednesday night, it's worse for Republicans. In spite of the fact that the Obamacare roll-out was messy, the Republican Party right now is being roiled in an intense internecine civil war that is keeping the party completely paralyzed.

This week the U.S. Senate is having all-night sessions as the Republicans attempt to slow down voting on a clutch of President Barack Obama's judicial nominees.

"None of them are controversial," Maddow said. "All of them are likely to be confirmed when their nomination comes up for a vote. But, Republicans have decided they're going to take a really long time to do that."

And, she added, the Republicans won't get anything out of this political stunt that they wouldn't get if they did nothing at all. The slowdown of voting is purely symbolic.

Senate Republicans are protesting the Democrats' decision three weeks ago to dispense with the normal two-thirds' majority needed for presidential nominations. Instead, now they only need a simple majority, action Democrats took in response to constant abuse of the filibuster by the GOP.

At the time of the vote, Kentucky Sen. Mitch McConnell told Democrats, "You'll regret this."

Now, payback appears to be coming in the form of Republicans staying up past their bedtime.

"This was the Democrats' whole idea," she said, "to try to make clear that the Republicans are abusing the filibuster."

"It's amazing, it's like he was hired by Democratic bloggers to illustrate what's wrong with Republicans in the Senate right now," she marveled.

But that's nothing compared to what's happening in the House of Representatives.

"If there is one thing to take more pleasure in than your opponent's outraged display of his own impotence in defeat," Maddow said, "it's got to be the spectacle of your opponent being driven to his knees by infighting on his own side."

In the House, "open warfare" has broken out between tea party Republicans and Republican Party stalwarts like Reps. John Boehner (R-OH) and Paul Ryan (R-WI), who are entering into a tentative budget deal with House Democrats.

This has outraged right-wing publications and pundits, who see any deal with Democrats as treachery and a danger to America.

Politico quoted Senate Conservatives Fund executive Director Matt Hoskins as saying, "John Boehner has apparently decided to join Mitch McConnell in the war on conservatives. McConnell called us fringe traitors who should be locked in a bar and punched in the nose, and now Boehner is lashing out at us too. Conservatives everywhere need to understand that the party’s leadership has declared war on them. If they don’t fight back, they will always regret it. We’re going to hang together or hang separately.”

All but cackling with delight, Maddow said, "Covering politics doesn't get any better than this."