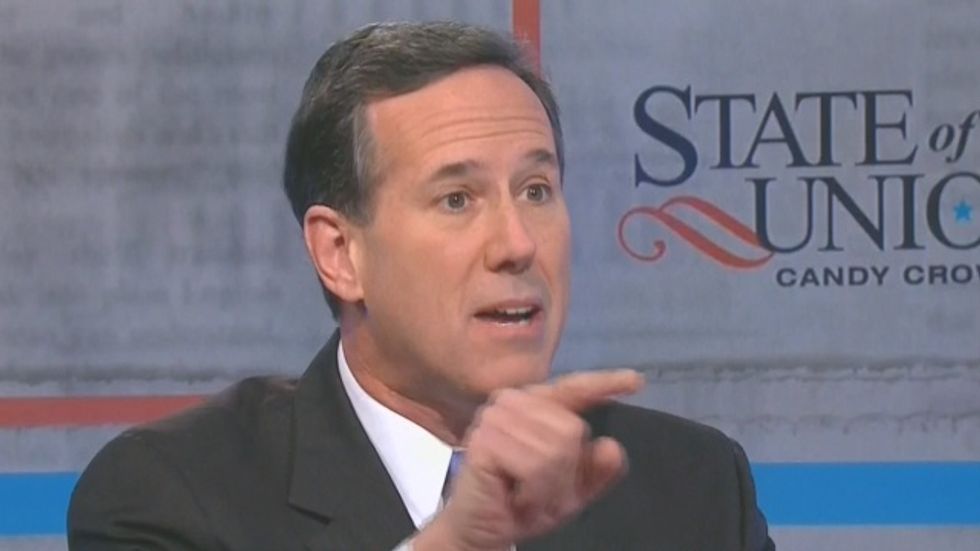 Former Republican presidential candidate Rick Santorum (R) on Sunday insisted that President Barack Obama was imposing his beliefs on corporations and preventing them from exercising their "right" to deny women contraception coverage in health care plans.

Last week, the Supreme Court agreed to decide if the corporation Hobby Lobby -- which has Christian owners -- had its rights violated by a mandate in the Affordable Care Act requiring most health care plans to offer birth control.

In a Sunday interview on CNN, former Gov. Howard Dean (D-VT) pointed out that he viewed the Vietnam War as "immoral" but had continued to pay his taxes throughout the conflict.

"This is one country, we all have to live by a set of things that are passed in Washington and are agreed to by the court," Dean said.

But Santorum asserted that employees knew that Hobby Lobby's owners were "very clear about their religious content."

"I mean, the idea that the First Amendment stops after you walk out of church, that it doesn't have anything to do with how you live the rest of your life, I don't know very many people of faith that believes that their religion ends with just worship," Santorum explained. "It ends in how you practice and live that faith."

Dean, however, argued that the First Amendment allowed the "free exercise" of religion but did not allow companies to make health care decisions for others.

"It can't enable you to force your religious views on other people," he said.