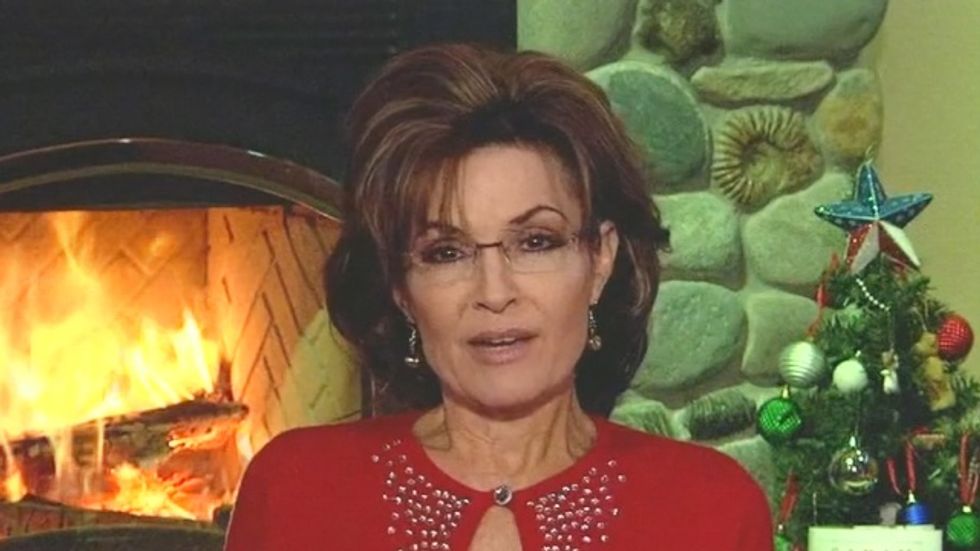 Former Alaska Gov. Sarah Palin (R) on Monday admitted that she reflexively started defending Duck Dynasty star Phil Robertson without ever reading the GQ interview where he compared homosexuality to bestiality and said that African-Americans were happy before they had civil rights.

“It seems like, to me, a vagina—as a man—would be more desirable than a man’s anus," he said.

He also claimed that he had never seen a black person mistreated in the South during the Jim Crow era.

"I never, with my eyes, saw the mistreatment of any black person. Not once," Robertson insisted. "They’re singing and happy. I never heard one of them, one black person, say, ‘I tell you what: These doggone white people’—not a word! ... Pre-entitlement, pre-welfare, you say: Were they happy? They were godly; they were happy; no one was singing the blues."

After the A&E network suspended Robertson from his show, Palin took to her Facebook page to opine that "[f]ree speech is an endangered species. Those 'intolerants' hatin’ and taking on the Duck Dynasty patriarch for voicing his personal opinion are taking on all of us."

Fox News host Greta Van Susteren pointed out to Palin on Monday that some "people" were misusing the term "free speech, meaning that you jump someone for saying something and that you don't jump others."

"But if the market wants to be such that people don't want to watch someone, then so be it," the Fox News host said.

"That's right," Palin replied. "That's why I say attorneys can discuss and argue whether it's a legal free speech issue or not."

"It's one thing to express your opinion," Van Susteren noted. "Do you have any problem, you know, about the manners of how he said it. We don't talk about it on television much, but if you actually the read article, there's a rather and offensive -- at least, I think -- offensive description of it. You know, there are two ways to say different things, and in the article and I know he's a graphic type guy, but do you have any objection on the manners aspect, how he said it?"