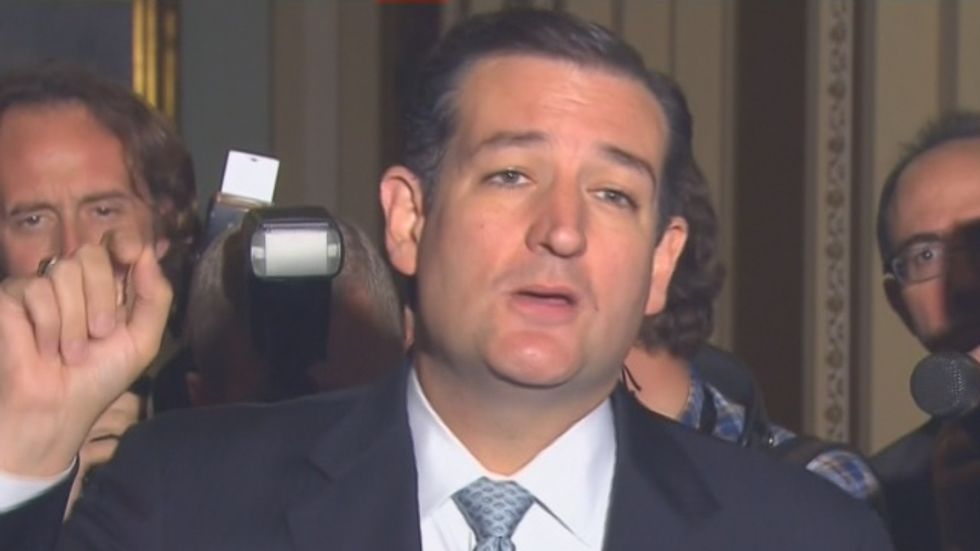 Senator Ted Cruz has said that he is taking steps to renounce his mysterious Canadian citizenship – in a move he insists does not in any way indicate a run for the White House in 2016.

The junior senator from Texas, who made a name for himself as a driving force behind efforts to bring down the Affordable Care Act by way of a government shutdown, was surprised to learn earlier this year – after some digging by one of his home state newspapers – that he reportedly enjoys dual citizenship.

In an interview with the same organ, the Dallas Morning News, published on Sunday, Cruz announced he was hiring lawyers to help extricate him from his apparently unhelpful surplus nationality.

Cruz was born in the oil-rich region around Calgary, Alberta, to an American mother and a Cuban father. His mother's nationality automatically made him an American citizen, regardless of the location of his birth or the citizenship of his father, who later became a naturalised American citizen. But his arrival into the world on Canadian soil also would have endowed him automatically with the nationality of that country, in accordance with Canadian law.

Cruz, 43, has always presented himself as purely American and was unaware of possibly holding dual citizenship until the Dallas Morning News presented the notion to him last August – a concept Cruz does not dispute "at this point".

"I have retained counsel that is preparing the paperwork to renounce the citizenship," he told the newspaper on Sunday.

According to the newspaper, Cruz and his parents were startled when it was revealed that he was a citizen of both countries. Cruz said he had been led to believe by his mother that it would have taken an affirmative act of claiming his Canadian citizenship, which the family had never done, to make it so.

Regardless of how many passports Cruz is entitled to hold, the simple fact that he qualifies as a "natural born American" because of his mother's nationality is enough to equip him legally to become president of the United States. Cruz previously released his birth certificate to the Dallas Morning News, in an effort to hush speculation that he was not a genuine American and therefore would be ineligible to be president.

The rightwing "birther" movement still disputes that President Barack Obama is a natural-born American, despite the public presentation of his full birth certificate from his native state of Hawaii.

In the interview published on Sunday, Cruz shrugged off any suggestions that his move was the beginnings of a run for the White House in 2016. "My political perspective is focused on representing the state of Texas," he said.

The topic of the senator's nationality – and possibly his lofty political ambitions – reportedly came up last month, when he met with the larger-than-life real estate mogul Donald Trump, one of the most vocal skeptics regarding Obama's nationality. Cruz admitted that his Canadian-ness was discussed, "though not in any significant respect".

Cruz has begun making appearances in states that hold the early primaries and caucuses in the selection process for presidential candidates, as well as making moves to raise money for what could be a high-profile campaign.

Following his interview he released a further statement. "The Dallas Morning News says that I may technically have dual citizenship," it said. "Assuming that is true I will renounce any Canadian citizenship. Nothing against Canada, but I'm an American by birth and as a US senator I believe I should be only an American."