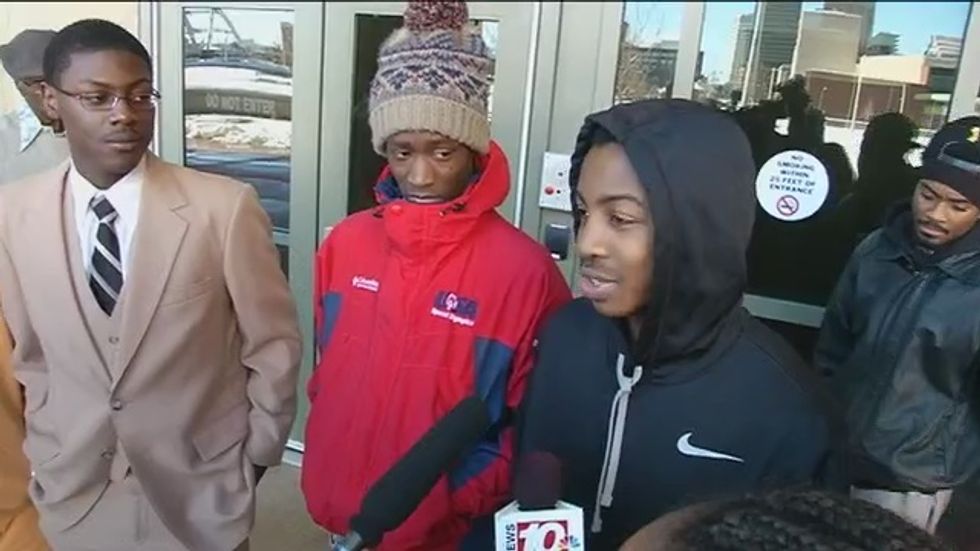 Three African-American students who were waiting for a school bus in Rochester, New York were arrested on Wednesday morning when police officer told them to "disperse," even though witnesses said they did nothing wrong.

According to WROC, basketball coach Jacob Scott had arranged for a school bus to pick up the boys to take them to a scrimmage on a day when school was closed.

A police report claimed that the boys were blocking "pedestrian traffic while standing on a public sidewalk...preventing free passage of citizens walking by and attempting to enter and exit a store...Your complainant gave several lawful clear and concise orders for the group to disperse and leave the area without complaince [sic]."

But the students and the coach dispute the police version of events.

"We didn't do nothing," student Raliek Redd explained. "We was just trying to go to our scrimmage."

"We was just waiting for our bus and he started arrested us," student Wan'Tauhjs Weathers added.

Daequon Carelock, who was also arrested, lamented that anyone could be "just downtown, minding your own business, and next thing you know, anything can happen."

Coach Scott arrived just as the boys were being handcuffed and was also threatened with arrest.

"He goes on to say, 'If you don't disperse, you're going to get booked as well,'" Scott recalled. "I said, 'Sir, I'm the adult. I'm their varsity basketball coach. How can you book me? What am I doing wrong? Matter of fact, what are these guys doing wrong?'"

"One of the police officers actually told me, if he had a big enough caravan, he would take all of us downtown," he noted.

Scott called the incident a "catastrophe" for the boys and witnesses who were traumatized by the arrest.

"These young men were doing nothing wrong, nothing wrong. They did exactly what they were supposed to do and still they get arrested," Scott remarked. "I'm speaking to the officers with dignity...and still and yet - they see me get treated like nothing."

"I think the charges should be immediately dropped and I think the district attorney's office should be stepping in and looking at these kinds of matters," she said.

"I'm very concerned about a pattern of young people being abused by police authority," Adams told WHEC. "To me, this seems like a really clear case, part of a pattern."

A trial for the three students is scheduled for December 11.