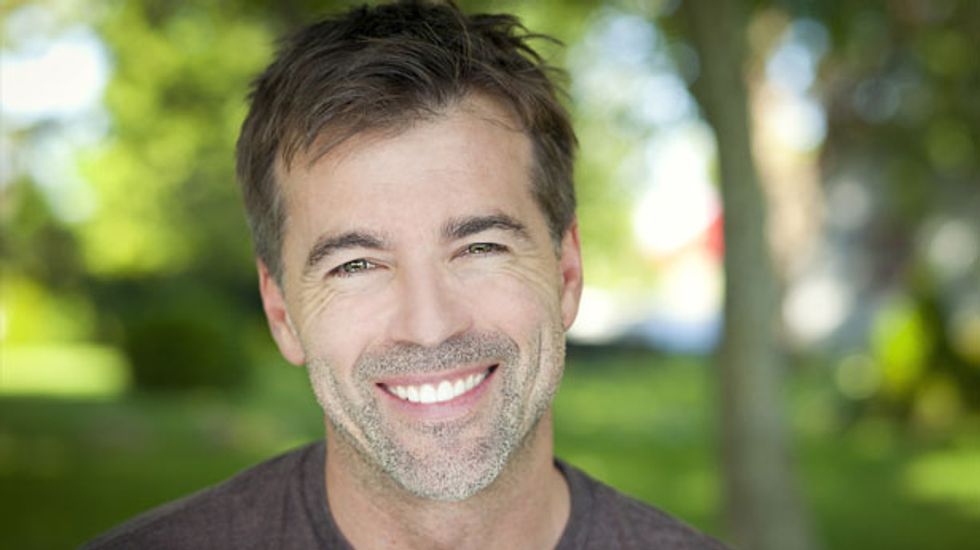 ["Close-Up Of A Man Smiling" on Shutterstock]

I thought I had heard enough febrile, hyperbolic pronouncements on modern masculinity to get me through any year, but I had not counted on Camille Paglia. In an interview with the Wall Street Journal, the maverick libertarian feminist pondered the implications of the feminisation of society and the devaluing of traditional masculine values. "What you're seeing is how a civilisation commits suicide," she declared.

Paglia is not a lone Cassandra. Hanna Rosin and Christina Hoff-Sommers have written on The End of Men and The War on Men and Boys respectively. This year, Diane Abbott warned of a crisis of masculinity that is seeing her young male constituents in Hackney corrupted by hardcore pornography and "a Viagra and Jack Daniels culture". From North America to Europe to Oceania, masculinity is being prodded, pathologised, diagnosed and bemoaned by voices from across the political, cultural and social spectrum. The great irony is that the overwhelming majority of these voices are female.

Most men instinctively know why this would be. It is the first rule of fight club, after all. Men's concerns, interests, anxieties or even pride in our own gender roles are typically sheltered by the conceits of fiction – as seen in the exquisite 62-hour thesis on modern masculinity that was Breaking Bad – or filtered through protective layers of irony and humour.Social media users recently parodied the internal travails of feminism with the hashtag #MeninistTwitter, but behind the walls of laddish banter and sexism, there were some very real anxieties and resentments on display.

The sledgehammers and stilettos of a gendered society impact upon, and are wielded by, every man, woman and child. Women – and feminists in particular – have spent centuries developing the vocabulary to discuss the myriad ways in which their lives are affected by gender constraints, and, crucially, they have carved the space in which to host those discussions. Men, too often, mutter into our pints and change the subject. This goes a long way to explaining why men vastly outnumber women in the figures for hazardous alcohol and drug abuse. It is why so many men in psychological crisis end up in a police cell rather than a GP's surgery. At the sharpest end, it may be why men are around three times more likely to take their own lives than women.

One organisation dealing with the fallout of this is the mental health charity CALM, the Campaign Against Living Miserably. In an attempt to turn around self-destructive male habits, they have announced that 2014 will be the Year of the Male – 12 months of campaigning, debate and discussion aimed at changing both public opinion and public policy towards male gender-specific issues. There will be a state-of-nation audit of modern masculinity, and a public campaign inviting men to share their stories and experiences. CALM's director, Jane Powell, says: "We think it's time to ask some big questions about men and work, health, the media, education, relationships and family and ask what it really means to be 'man enough'?"

Separately, the Southbank Centre recently announced a major festival at the end of January entitled Being a Man in which voices as diverse as Jon Snow, Baaba Maal and Grayson Perry will contribute to a weekend of performance and conversations on how men's roles are evolving.

All this leaves hanging a central question of whether examining, debating and discussing masculinity will actually do anything to change the habits and behaviours of men themselves or society's expectations and obligations. The supposed crisis of masculinity is largely a crisis in economics and employment, education and social policy, health and social service delivery. Those are not issues that can be solved with an introspective healing circle. Identifying and addressing those problems means changing how we behave as men, and towards men. If that means the end of civilisation as we know it, then perhaps it is a model of civilisation that needs to go.

["Close-Up Of A Man Smiling" on Shutterstock]

An 18-year-old gunman killed his grandmother Tuesday in Uvalde, Texas, a Hispanic town 85 miles west of San Antonio, before going to a local elementary school. He found a teacher and 19 fourth-graders in a classroom. He locked the door behind him. He shot them to pieces.

The shooter is dead. Police broke down a barricade and killed him. Salvador Rolando Ramos went to Robb Elementary School, the site of the shooting. Not since Sandy Hook, nearly a decade ago, down the road from where I’m writing, have so many children been massacred.