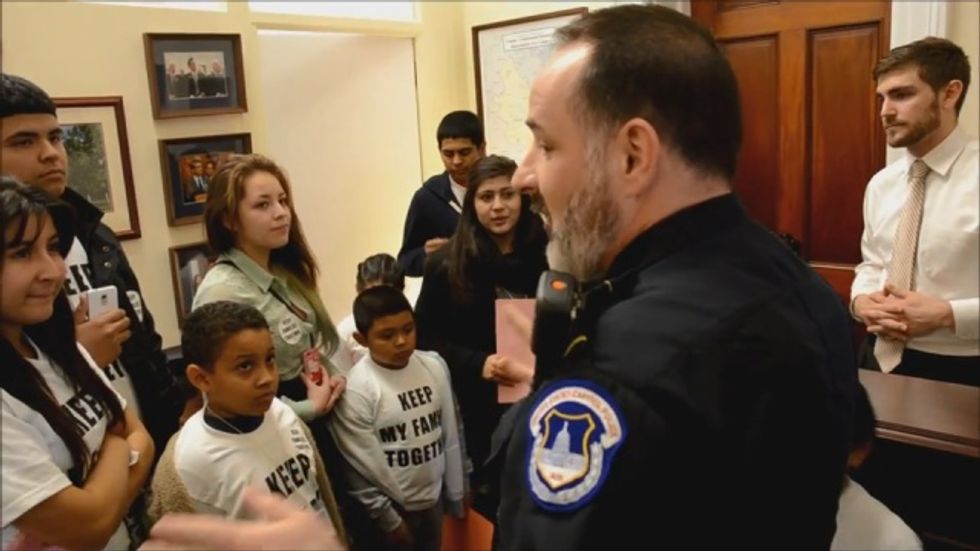 A group of children calling for immigration reform were forced to leave House Majority Leader Eric Cantor's (R-VA) office on Thursday after Capitol Police officers threatened to arrest them.

In a video posted to YouTube by the group Keeping Families Together, the children are seen in Cantor's personal office singing: “We want reform, we want it now. We are titanium. Keep our families together. We want reform right now."

At that point an officer interrupted the protest to ask if anyone there was planning on getting arrested.

"I heard what you're doing, I appreciate what you're doing," the officer explains. "The congressman can't do anything right now, they can't meet with you. So, please, set [an appointment up] through email. Please don't sing again, guys."

"We have to ask you to leave. If you don't want to leave... if you want to stay in, you're subject to arrest," he adds.

After another verse, the frustrated officer warns against that "everyone that stays in this room may be arrested."

While the children did eventually decided to leave peacefully, another clip shows them being loudly scolded for singing outside Cantor's office.

Watch the videos below from Keeping Families Together, broadcast Dec. 5, 2013.