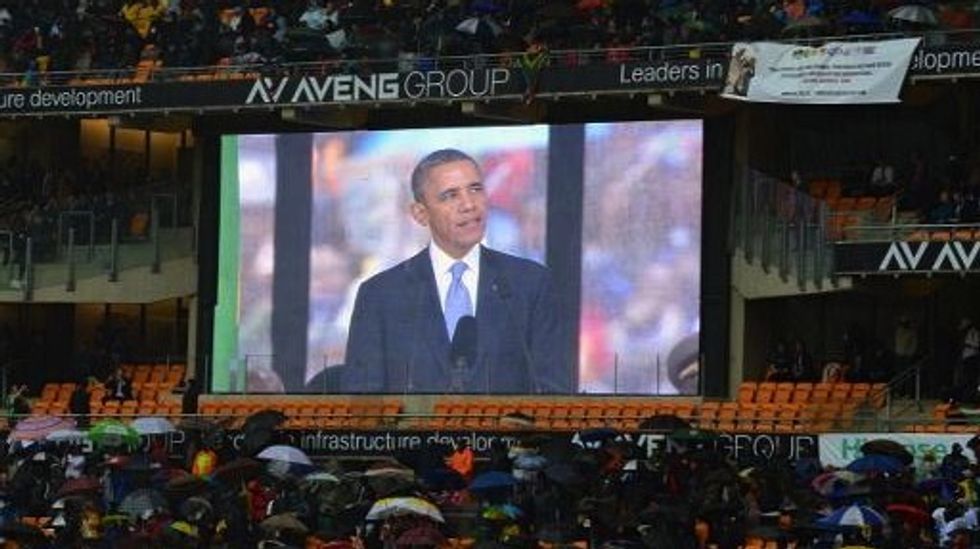 US President Barack Obama on Tuesday eulogized Nelson Mandela as a "giant of history" who earned his place in posterity through struggle, shrewdness and by showing the power of political action.

Obama painted Mandela as a testament to how people can reach for change by fighting for their ideals and employing reason and argument to match personal sacrifice.

"It is hard to eulogize any man ... how much harder to do so for a giant of history, who moved a nation towards justice," Obama said, after being introduced to wild cheers from a rain-sodden crowd in a Soweto stadium during Mandela's memorial service.

"He was not a bust made of marble, he was a man of flesh and blood," Obama said of the man whose example inspired his own entry into politics as a student.

"Nothing he achieved was inevitable. In the arc of his life, we see a man who earned his place in history through struggle and shrewdness, persistence and faith.

"He showed us the power of action, of taking risks on behalf of our ideals," Obama said.

Obama was joined at the ceremony by three other former US presidents, Jimmy Carter, George W. Bush and Bill Clinton, who sat sheltered from the teeming rain along with former secretary of state Hillary Clinton.

Obama argued that while Mandela's passing should be marked by a time of mourning, it should also mark a moment of inspiration when people look at how they can change their own lives.

And he drew a line between Mandela's triumph over the racist apartheid system and America's own journey towards racial justice.

"Michelle and I are the beneficiaries of that struggle," Obama said, comparing Mandela's role in South Africa with his own political heroes, including the founding fathers and assassinated president Abraham Lincoln who freed the slaves.

The president, who flew 16 hours to the ceremony, also took a swipe at authoritarian leaders and enemies of the United States who claim to embrace Mandela's legacy but did not act upon it.

"There are too many leaders who claim solidarity with Madiba's struggle for freedom, but do not tolerate dissent from their own people," he said, in a comment that might have been aimed at Cuban leader Raul Castro, who was to follow him on the roster of speakers.