Yesterday was 2014's one week anniversary. Did you celebrate? We'd sure did with cake and pudding and a Brazilian wax because that is the traditional gift of one week anniversaries. So far this year has been pretty swell if you disregard the fact that great portions of the country have become ice-choked hellscapes, which has nothing to do with climate change by the way, and also if you are not Chris Christie whose New Year's resolution to shed some staffers should begin any minute now.

So we look forward to many fun and interesting articles and posts and twitter-twattings to come from our conservative brethren and sisthren in the hope that they may bring us great mirth and LOLing at their lack of self awareness and 'facts' and common sense and such and such. Under normal circumstances we would expect the worst of the worst to come from the Washington Post's Richard Cohen who reported last year (Exclusive! Must credit Richard Cohen) that slavery wasn't near as fun (steady work, lots of fresh air, plenty of exercise, free room & board) as we had all been taught in our failing schools. Also, too, there was that time when Cohen declared that looking at mixed-race couples is the new syrup of ipecac, which is good news to couples with newborns. Unless, of course, the couple is mixed-race.

Having said that, our first entry for Contractually Obligated Weekly Column Someone Actually Wrote That Everyone Is All WTF?, Are You Serious? Really? belongs to S.E Cupp of the New York Daily News and CNN's Crossfire, which is the least watched reality show on teevee outside of Who Wants A Barium Enema? Cupp, whom you may understandably mistake for Elisabeth Hasselbeck in glasses, has made a career  out of being a perky contrarian (she's complex! she's wacky! she's unpredictable!); an atheist who blames liberals for being mean to Christians even though she thinks their god is bullshit, or that time she didn't want to clean up the BP spill because the ocean would just get dirty again anyway. That kind of stuff.

So, as we say every morning when we open up the browser to see what fresh hell the day holds for us: now what?

S.E. is very concerned that progressives are facing a moral quandary, an existential crisis, a potential loss of faith (the few progressive non-atheists only) that Colorado's new marijuana laws (the We're Gonna Need More Taco Bells Act of 2013) will disrupt the time-space continuum of liberal belief because, you know, dope is just like guns. Ah-yup:

That all remains to be seen, but some obvious extrapolations make it clear that the legal weed experiment could at least put the politics of progressivism - all the rage in liberal circles now - in a tricky spot.

For one, there are glaring inconsistencies between the liberal argument for pot legalization and positions on other issues. An obvious one is gun control.

The same argument used against guns is used for pot: that legalizing pot and making it more available will reduce crime. No good liberal would say the same of guns, though there is substantial evidence to prove more guns equal less crime.

Yeah. No. Legalizing pot means that we will not be wasting our time arresting people (predominately of the dusky hue for the being black while buying stuff white people buy ): 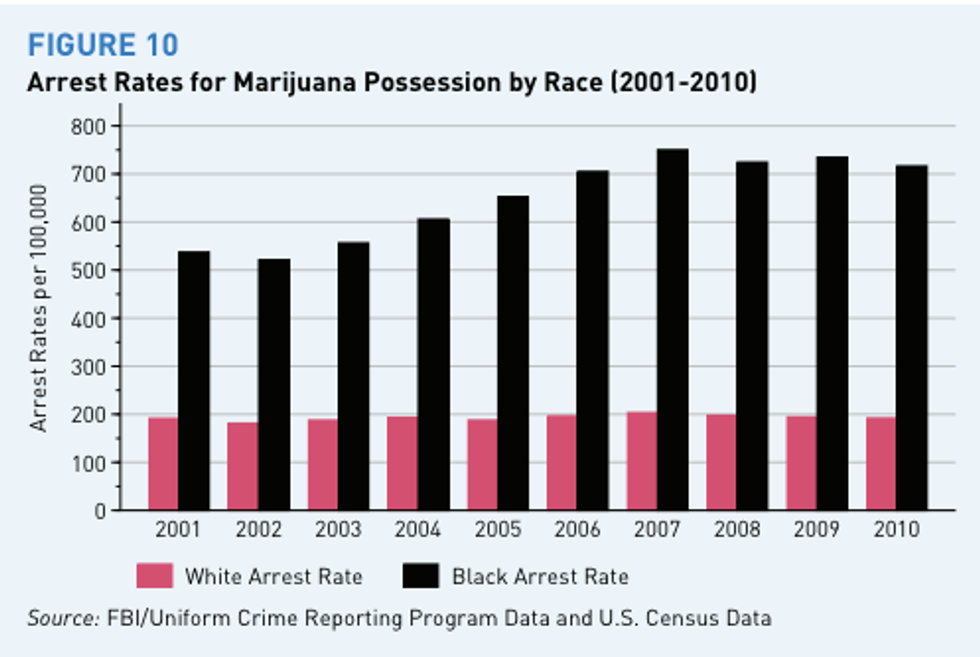 ... for the victimless crime of smoking marijuana in the privacy of their own home. Or at a Phish concert; a concert, I might add,  that some believe is a crime in and of itself. Guns, which are legal, don't become a criminal issue until someone points one at another person or a classroom full of toddlers and pulls the trigger in order to touch the face of God. Or Wayne LaPierre. Rarely does marijuana consumption lead to a multi-state crime spree (again, not counting quitting your job and following Phish from state to state) outside of criminalizing citizens, destroying their lives, making it difficult for them to get jobs, and thus causing them to resort to desperate measures in order to survive. Sort of like if Jean Valjean had stolen a tray of hemp brownies.
Cupp adds:

We're told pot users will "responsibly" use marijuana in the privacy of their own homes. But what barometer are they using to determine that persistent recreational drug users, who have presumably broken the law before by possessing marijuana, are responsible people? And why aren't lawful gun owners afforded the same level of trust?

If progressives want to keep gun control in the crosshairs - and many have said they do - they'll have to reconcile this intellectual incongruity.

No. No we won't. Just stop. We got this. We're cool. But thanks all the same.
Here, have a brownie...
Report typos and corrections to: corrections@rawstory.com.
READ COMMENTS - JOIN THE DISCUSSION