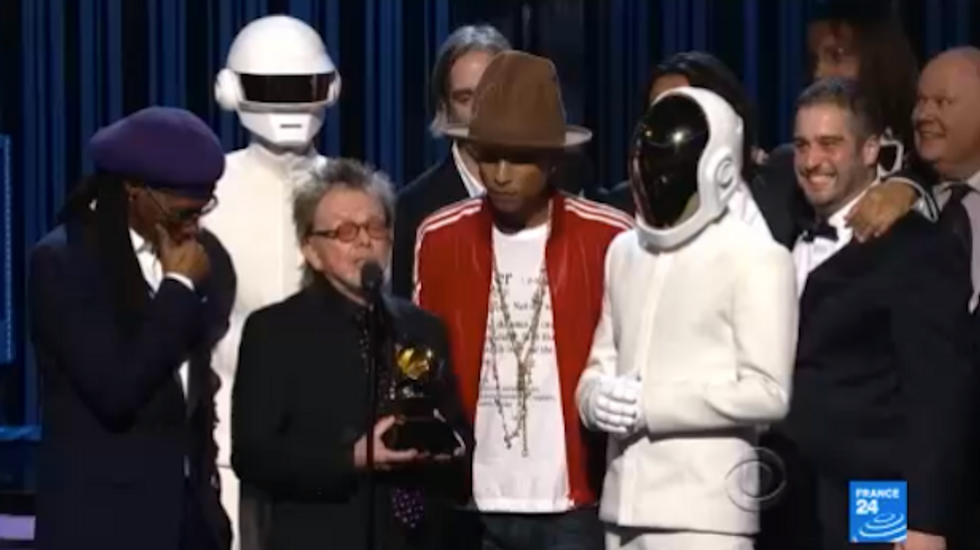 The French electronic pioneers capped the night with the win after taking Song of the Year for “Get Lucky."

The two mask-wearing musicians hugged each other for several seconds before taking the stage with Pharrell, Nile Rodgers and Paul Williams, part of the large crew who helped Thomas Bangalter and Guy-Manuel De Homem-Christo produce the album.

“Thank you everyone who has let this song explode because it’s been mental,” she said.

“Wow, we’re here on the stage right now,” said Macklemore, thanking fans first, then his fiancée and team. “I want to say we made this album without a record label, we made it independently and we appreciate all the support.”

Beyonce kicked off the Grammy Awards with a steamy performance of “Drunk In Love.” Jay Z emerged in a fitted suit to rap his verse, and the couple held hands and danced together.

Imagine Dragons and Kendrick Lamar collaborated onstage to create an electrifying performance, as the acts sported all-white and went from rap song to rock song. Robin Thicke performed with Chicago, singing the group’s songs before going into “Blurred Lines,” which energized the crowd.

Swift, who is nominated for album of the year, lost best country album in a surprise upset to rising singer-songwriter Kacey Musgraves. “Oh my goodness. Oh my god. I can’t even. I can’t even,” said a teary-eyed Musgraves, whose “Same Trailer Different Park” won the honor. “I got to make a record that I poured myself into and I’m so proud of.”

The singer also beat Swift for best country song and was nominated for new artist.

Macklemore and Lewis’s wins, which included best rap song and rap performance for “Thrift Shop,” come after the Grammy rap committee almost ousted the group from its categories.

A source told The Associated Press that the rap committee rejected the duo, but that was later overruled by the general Grammy committee. The rap committee felt Macklemore and Lewis should qualify for the pop awards instead because of their massive success on Top 40 radio.

The source, who attended the general Grammy meeting, spoke on the condition of anonymity because the meeting was private.

“I want to thank God – I mean a little bit for this award – but mostly for all the universe for conspiring and putting that beautiful light of a young lady in my life,” Jay Z said, looking at Beyonce. “I want to tell Blue that, look, ‘Daddy got a gold sippy cup for you.””

“Ma, I know you’re watching. I hope you’re smiling. I love you very much,” said Mars, remembering his mother, who passed away last year. Mars’s father attended the awards show.