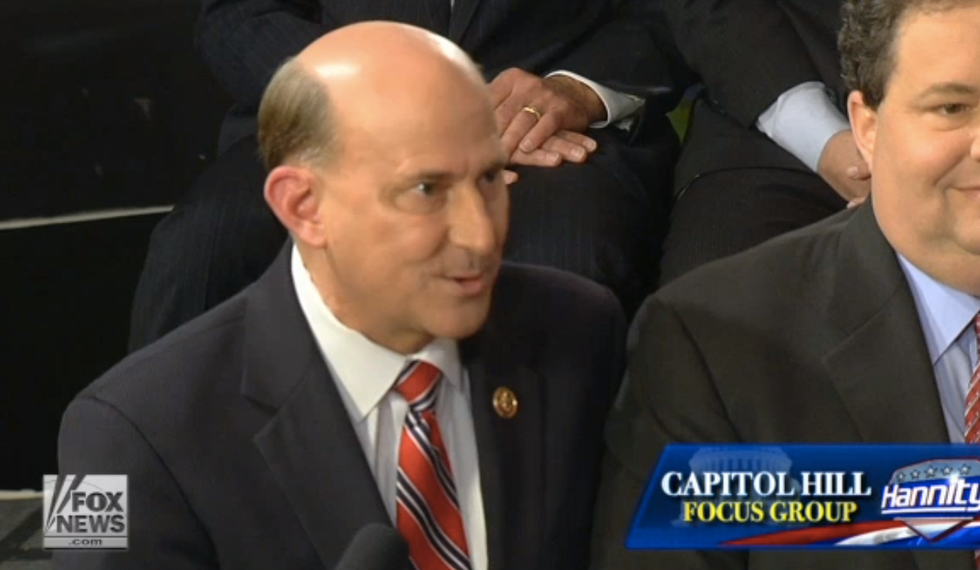 Wednesday night on his Fox News program, Sean Hannity hosted a so-called "focus group" that was actually a panel of right-wing, Tea Party legislators from the U.S. House of Representatives.

The group vented about their frustrations with President Barack Obama's State of the Union speech and discussed ways of repealing the "nightmare of Obamacare' after being unable to do so after more than 40 unsuccessful votes.

Hannity did a kind of round robin group discussion with the lawmakers, beginning with Rep. Louis Gohmert (R-TX), who had invited Hannity to attend Obama's speech as his guest.

Gohmert, who recently proposed that the government raise taxes on Americans who receive welfare money, opined that the Affordable Care Act -- also known as Obamacare -- "isn't going to fix health care, it's going to destroy it."

Next was Rep. Steve King (R-IA), who John Boehner called an "asshole" over his bizarre remarks accusing DREAM Act students of being drug mules "with calves the size of cantaloupes."

King said that when Democrats start to figure out that "they can't run on Obamacare," that will be the death knell of the program. Fellow Texas Rep. Blake Farenthold (R) said that when people figure out how much more expensive Obamacare is than their old policies, they'll turn on the president and vote Republican.

"It all goes back to the pocketbook," he said. "We're actually getting less people insured than before."

Farenthold famously asked injured U.S. veterans to understand that the Republican-led government shutdown in the fall of 2013 was for their own good, even though it shut down VA hospitals from coast to coast.

Erstwhile Republican presidential contender Rep. Michele Bachmann (MN) said that she wanted to assure the American people that her caucus will continue in its Sisyphean quest to repeal the ACA.

"I just want to give the American people hope that there are members of Congress that aren't going to give up," Bachmann said. "We're going to stay on the repeal train because that's hurting Americans. We want health care to be better and we want people's lives to be better."