India cracks down on U.S. embassy as deadline nears for envoy's indictment 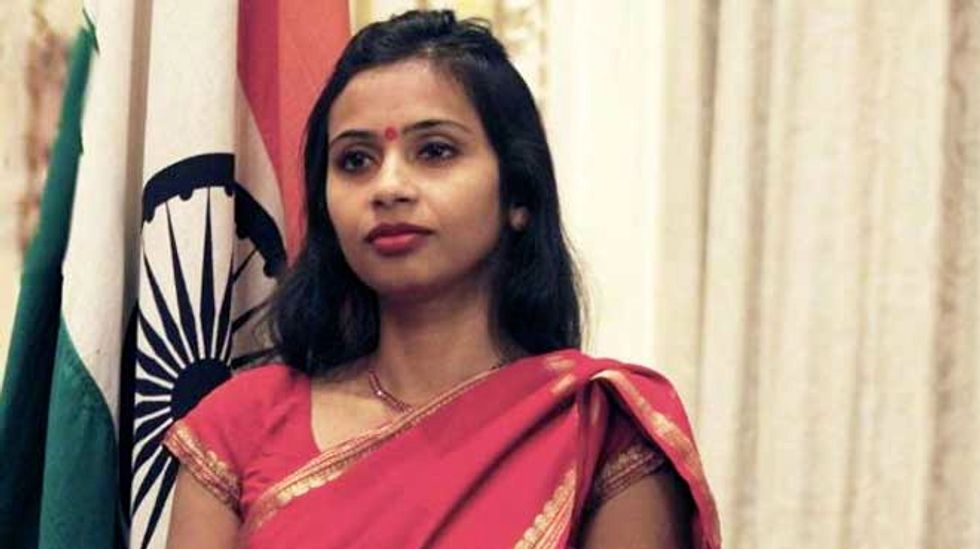 India has ratcheted up the pressure on U.S. diplomats in Delhi as the deadline nears for the indictment of an Indian envoy in New York charged with visa fraud and underpaying a maid.

Washington has been told that restaurants and other facilities at the social club in its Delhi embassy will have to close to non-diplomats and that inquiries into the tax affairs of U.S. staff will be pursued aggressively.

The arrest last month of Devyani Khobragade, the Indian deputy consul general in New York, enraged Indians and has prompted the biggest crisis in relations between Delhi and Washington for many years.

Tensions rose further when the prosecutor handling the case in New York issued a hard-hitting statement accusing Delhi of turning a blind eye to exploitation of domestic workers serving its envoys overseas.

The latest move is "simply in line with a policy of strict reciprocity", a senior Indian official said.

It was announced later on Wednesday that the U.S. energy secretary, Ernest Moniz, would no longer travel to India as planned next week.

"I can confirm that Secretary Moniz is no longer traveling to India next week," an energy department official told Reuters. "We have been in conversation with Indian counterparts about the dates, and we have agreed to hold the dialogue in the near future at a mutually convenient date."

Though John Kerry, the U.S. secretary of state, has expressed his "regret" for Khobragade's arrest, this falls far short of the full apology that India wants.

"The exact words aren't important. But either this was a mistake or a clear indication of how little they value their relationship with India. If it was a mistake, they can say sorry and we can move on," the official said.

Delhi has demanded that all charges be withdrawn and has transferred Khobragade, 39, to its mission at the United Nations. This theoretically gives her full diplomatic immunity, but also implies a change in immigration status which has to be allowed by the U.S. state department.

Khobragade, 39, is accused of declaring on visa documents that she would pay the nanny she brought from India the minimum wage in New York, and then making her work long hours for a fraction of the agreed rate. Freed on payment of a $250,000 bond, she is due in court on 13 January and could face a maximum sentence of 10 years if convicted.

Her lawyer is believed to have applied for the date by which the diplomat has to be charged to be pushed back to allow discussions with prosecutors.

The U.S. embassy club is based in a vast compound located on embassy grounds in the centre of Delhi, and boasts a swimming pool, baseball pitch, stores selling imported U.S. products and a number of restaurants. Along with the American Embassy School, it is central to the social life of families of many expatriate employees of U.S. corporations in India.

"The use by non-diplomats is contrary to [diplomatic] conventions and we believe raises an issue of tax evasion," the Indian official said.

India had already curtailed privileges offered to U.S. diplomats to bring them in line with the treatment of Indian envoys to the United States. Since December, the U.S. ambassador in Delhi can be subjected to airport frisking and most consular staff have reduced levels of immunity.

Concrete security barriers were removed from a road near the embassy last month, apparently in retaliation for the loss of a parking spot for the Indian ambassador in Washington.

India is also preparing to take steps against the embassy school, which it suspects may be employing some staff in violation of visa requirements, government sources told Reuters.

Indian diplomats recently received support from one slightly unlikely quarter – their hostile neighbour Pakistan. "In the entire world, there is only one way … the Vienna convention ought to be respected in letter and spirit by everybody," Salman Bashir, the outgoing Pakistan high commissioner, said this week.

The arrest of Khobragade touches a range of sensitivities in India. Almost all middle-class households in India employ at least one, and often several, members of staff who will undertake tasks from cleaning and cooking to childcare and driving.

With few Indian diplomats paid wages that would allow them to legally employ local staff to perform such functions in postings in the west, the practice has long been for Indian workers to be flown out and paid rates that, if illegal in U.S. and elsewhere, would be generous at home.

Preet Bharara, the prosecutor in Khobragade's case, said last month: "In fact the Indian government itself has been aware of this legal issue, and that its diplomats and consular officers were at risk of violating the law. The question then may be asked: is it for U.S. prosecutors to look the other way, ignore the law and the civil rights of victims ... or is it the responsibility of the diplomats and consular officers and their government to make sure the law is observed?"

However, the arrest has outraged Indian diplomats who say none of their colleagues have been treated in such a way since one was handcuffed during the Cultural Revolution in China.

"We have the support of the entire Indian society on this. We are a country of a billion people with a reputation for being independent in our world view but we believe in our relationship with the U.S. and that is why we are genuinely shocked," said the Indian official.

There have been several previous incidents involving senior Indian diplomats in the U.S. and domestic staff brought from India. In 2011 the Indian consul general, Prabhu Dayal, was accused by his maid of forced labour and sexual harassment, charges he called "complete nonsense" and that were later dropped.

A year earlier a U.S. judge recommended that an Indian diplomat and her husband pay a maid nearly $1.5m in compensation for being forced to work without pay and suffering "barbaric treatment" in their luxury Manhattan apartment.

The outrage in India has been fuelled by politicians' unwillingness to seem out of step with public mood with a general election only months away.

Relations between the U.S. and India have long been rocky, though steadily improving since a nadir in the 1970s. Barack Obama received a warm welcome on his visit in 2010. However, there remains deep suspicion of Washington in Delhi, and in India more generally, and many US officials see India as a difficult partner.

On Saturday, The Times of Israel reported that Camp Hikon, a planned Orthodox Jewish summer camp in upstate New York, has stated its plans to bar vaccinated children or counselors from the facility — and that their website is laden with conspiracy theories and misinformation about COVID-19.

"Advertisements for Camp Hikon, planned for upstate New York, appeared on email listservs popular in the Orthodox Jewish community just days after a private school in Miami made news for discouraging teachers from getting the vaccine and telling children they were not to have contact with vaccinated people," reported Shira Hanau. "The camp's announcement also comes as posters encouraging people not to get the COVID-19 vaccines appeared in Midwood, Brooklyn, the Orthodox neighborhood where one member of the founding team runs a natural foods store."

The COVID-19 pandemic changed everything for the airline industry. Besides the obvious need for safety measures to counter an airborne virus, the industry suffered "the largest drop in air travel in history," according to the International Air Transport Association (IATA), a 290-member trade association for the global airline industry. This drop in traffic was not entirely consumer-driven, as governments throughout the world limited travel to slow the spread of the novel coronavirus.