Jean-Jacques Rousseau: Is the author of 'The Social Contract' as relevant as ever? 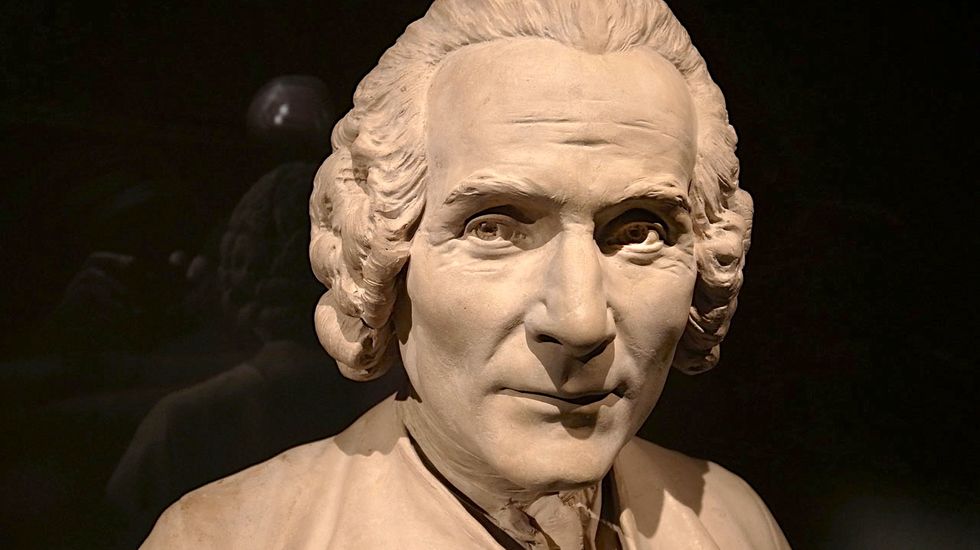 The philosopher's thought still has the power to challenge our deepest assumptions on identity, religion and the Enlightenment

Jean-Jacques Rousseau is generally seen, especially in Britain, as the worst sort of intellectual: absurdly self-regarding, and dangerously naive, in his fond belief in the natural goodness of humanity, which fed the excesses of the French Revolution, and maybe sowed other totalitarian seeds.

I have come to think he deserves more respect. While recently researching the roots of secular humanism, I found that he stood out from the list of dead white males I was considering. While other thinkers made important contributions to this or that movement, Rousseau made the weather. Also, he is psychologically fascinating – he makes other thinkers of the age seem wooden.

His thought is as relevant as ever, for he confronted deep human needs, such as the need to reconcile personal integrity with social belonging, the need to reconnect with the natural world, the need to escape the hyped-up tinny crap that passes for culture and seek out some sort of authenticity, and above all perhaps, the glorious yet embarrassing need that drives us all, the need to be ourselves. And some of our deepest assumptions seem rooted in his thought, or first expressed there. For example, the assumption that the large-scale systems we inhabit are corrupt, tawdry, destructive, and that we individual people are the poor little pure-as-snow victims. Another example: we are all the authors of our life-stories. We don't notice such patterns of thought until we see them being thought up.

Also, I think that looking at Rousseau's thought can nudge us towards more intelligent discussion of religion and atheism. This is not because I agree with his thinking on religion – I don't. But it helps us to see where our debate stems from. He passionately believed in a God who created the world and who allowed himself to be known – but not through revelation, in the sense of something contained in scripture or church tradition; rather through the compassion that comes naturally to us, and the appetite for rational wonder that he has instilled in his creatures. He thought that this natural moral impulse will flourish as long as false ideas and conventions do not twist it out of shape. There's a major overlap with what we know as atheist thinking here, but in religious, or at least theistic, form. Maybe attending to this can prod us into seeing our own debates afresh.

Rousseau was born in Protestant Geneva in 1712. His father was a watchmaker; his mother died in childbirth. Aged 16 he left his apprenticeship and wandered through Savoy, doing odd jobs. He found a patroness-cum-mistress who was a very liberal Catholic; she helped him find work as a musician. He then moved to Paris in 1741, and did some writing for the Encyclopédie. Then, in 1749, he had an acute experience of vocation. It came as he saw the title of a journal's essay competition: "Has the advance of the sciences and the arts helped to destroy or to purify moral standards?" Suddenly he knew that he hated his culture, and that he was a great thinker. He won the competition, and fame, by arguing that modern culture was, for all its proud enlightenment, a mire of falsity, corruption and inauthenticity. And he showed that he meant it, by refusing the identity of the urbane literary star and choosing to earn a living by copying out musical scores – no schmoozing with influential employers for him. (He also wore conspicuously cheap clothes, like someone choosing to wear nasty old jumpers from charity shops.)

What was his problem? Didn't he believe in rational progress towards a more humane world? Here's the interesting paradox: he did believe in this Enlightenment vision, but with an awkward intensity that made him see its other advocates as complacent, worldly, merely pragmatic. He thought that the humanist vision needed a new basis in a big narrative about the liberation of humanity's innate goodness, a story about how civilisation tends to impair this. This was expressed in various works of the 1750s and then in The Social Contract .

He also found a wider audience as a novelist. But he became no more settled, no less prickly. His novel Emile expressed reformist religious ideas that so angered the authorities that he had to flee – to Germany, then England for a time, where he was hosted by a rather bemused David Hume. He now developed a partly justified persecution complex. He started writing autobiographically: his startlingly frank Confessions occupied his last years. He still failed to enjoy his fame as an author, forever complaining that his ideas were misunderstood and his character maligned. He found some solace in his hobby of botany. He died in 1778.

Oh yes, and all this time – since his move to Paris in the 1740s – he had a partner, or mistress (they finally married in 1768), with whom he had five children. What fortunate children, you might think, to be born to such a great champion of the compassionate human spirit. Think again: they were given away to an orphanage as babies.

The Taliban government's restrictions on women are aimed at making them "invisible" in Afghan society, a UN human rights observer said Thursday during a visit to the nation.

Since the Taliban stormed back to power last year, they have imposed harsh restrictions on women and girls to comply with their austere vision of Islam.

‘Doing nothing is a sin’: Morning Joe unloads on GOP for refusing to stop the ‘slaughter of babies’ by guns

MSNBC's Joe Scarborough framed gun safety laws as a moral imperative, and not a political issue.

Republicans have resisted talking about measures to prevent the epidemic of mass shootings, saying it was unfair to politicize gun rights, but the "Morning Joe" host said it was long past time to discuss ways to keep military-style weapons from falling into the hands of killers.