Jon Stewart to Sean Hannity: 'It's not East Germany, you can get out' of NY 'any time' 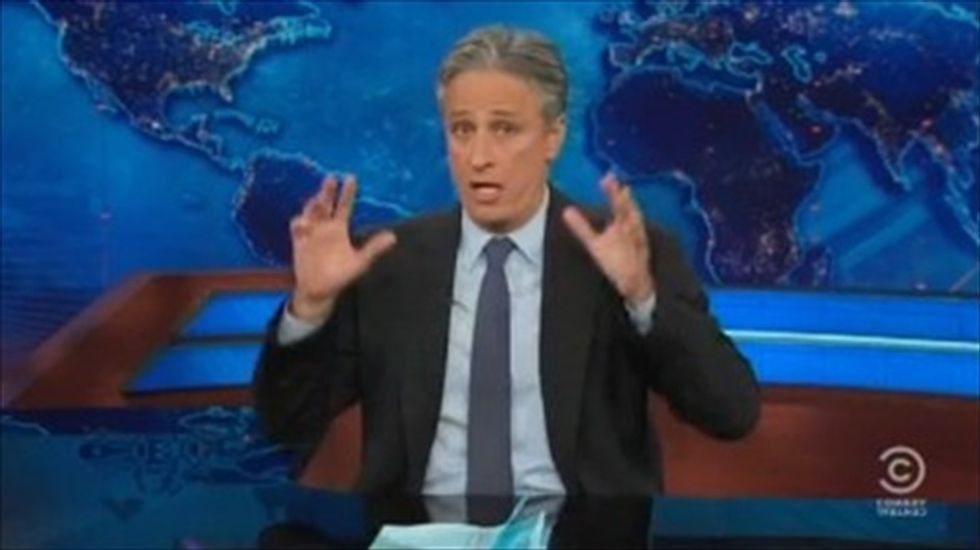 Jon Stewart enlisted a borough full of New York City residents and stars -- including the cast of the musical Jersey Boys -- to ask Fox News host Sean Hannity not to follow through on his promise to leave the city (from which he was already retreating).

"Remain in the state that fills you with hate," the Jersey gang sang. "That's the state you will live in anyway."

Stewart noted that Hannity went from being upset by Gov. Andrew Cuomo's (D) statement that "pro-assault weapon, anti-gay" conservatives weren't welcome in the city to speculating aloud about the benefits of living in state-tax free Texas, where Gov. Rick Perry (R) has said much the same thing about marriage equality supporters.

"Sounds like he's got a case of Selective Undergarment Bunching, or S.U.B.," Stewart reasoned.

Of course, Stewart said, Hannity wasn't as trapped as he made himself out to be.

"He's gotta know, it's not East Germany," Stewart pointed out. "You can really get out any time."

But with the help of actor Nathan Lane, fashion mogul Tim Gunn and others, the Daily Show host offered up an entreaty from New Yorkers from just about all walks of life.

"I will lose my accent if you stay," one cab driver promised. "Let's grab a beer and watch the game."

Watch Stewart and friends make their pitch, as posted online on Monday, below.