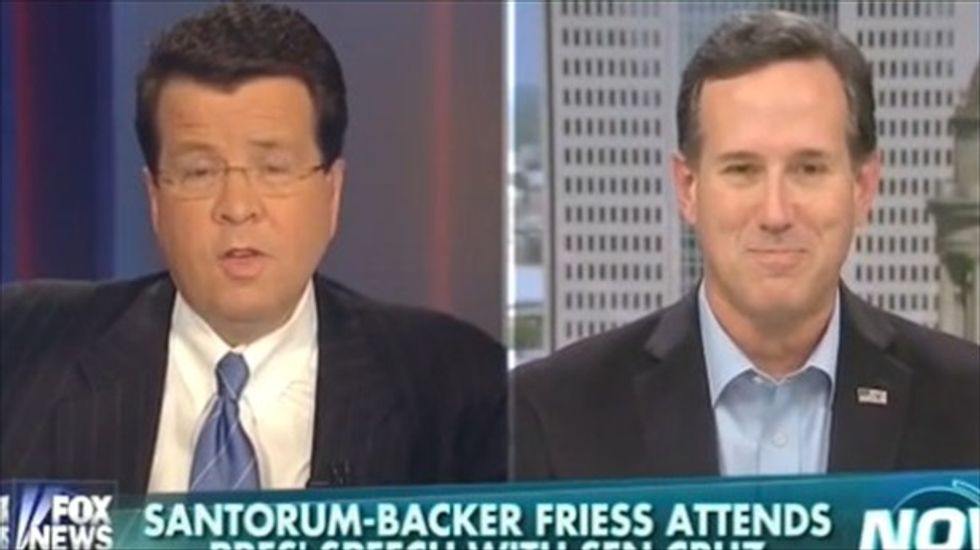 Former Republican presidential candidate Rick Santorum seemed to be caught by surprise when Fox News host Neil Cavuto tried to get him to agree with his negative assessment of Rep. Cathy McMorris Rodgers' (R-WA) response to Tuesday's State of the Union address.

"I'm a fan of Cathy McMorris Rodgers, she's a great congresswoman," Santorum said, before Cavuto cut him off.

"Look, I don't know anybody that does those well," Santorum offered, a sentiment with which Cavuto did concur.

"It was not a good night for Republicans to respond," Cavuto said, before alluding to the multiple conservative responses to President Barack Obama's speech. "They looked like they were coming from all over the place. You're quite right -- anyone responding to the President of the United States, and the unique position he has, speaking around all that pageantry, you're right. But, come on."

After a brief silence, Santorum said he was not defending the fractured GOP response.

"I didn't go out there and do it, because I didn't think it was the appropriate thing to do," Santorum said. "But I think it does demonstrate the frustration that some people have with how things are going in Washington D.C. overall, not with the Republican Party in particular."

Santorum did not explain how he would have qualified to deliver any of the responses, since he does not currently hold an elected office.

Watch the discussion, as aired Wednesday on Fox News, below.