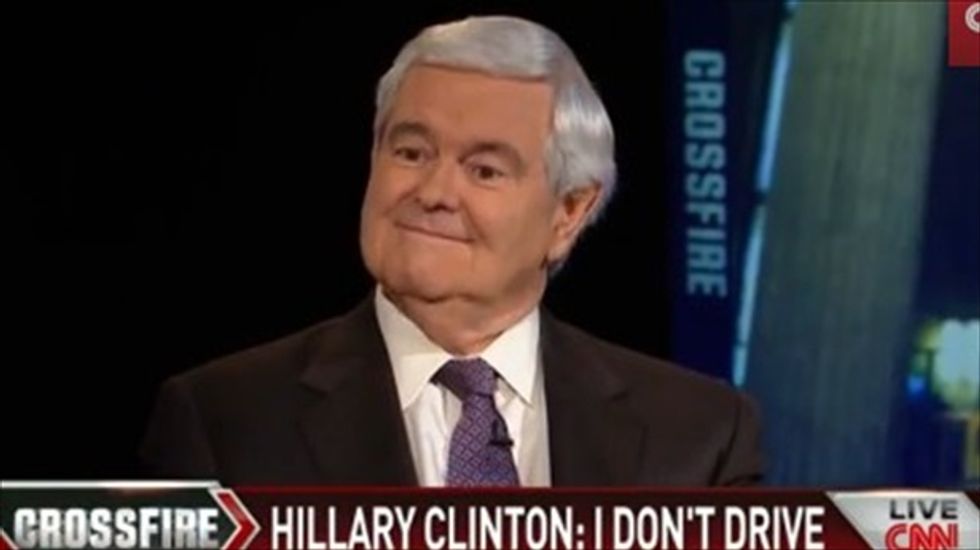 CNN host Newt Gingrich attempted to join the group of conservatives undermining ex-Secretary of State Hillary Clinton Monday night by deriding her for not driving.

"Here's a woman whose effort to get back in touch with us doesn't involve driving across America -- or even driving to the grocery store," Gingrich said. "It's being chauffered to the national auto dealers convention to tell them, quote, 'I wish I could drive one of your cars'?"

Gingrich was referring to Clinton's appearance at the National Auto Dealers Association annual convention, during which she confessed that she has not driven since 1996.

"I remember it very well," Clinton said. "And unfortunately, so does the Secret Service, which is why I haven't driven since then."

What Gingrich did not mention is that, based on her account, Clinton drove herself during the first half of her husband Bill Clinton's tenure as president -- a rarity for a First Lady. Gingrich also ignored the possibility that Clinton was not allowed to drive herself while she was Secretary of State under current President Barack Obama.

Gingrich also failed to state whether his own auto-related activities -- including reported extramarital trysts and comparing second wife Marianne to a car -- should have elevated his own failed bids for the presidency.

Watch Gingrich's remarks, as aired on CNN on Tuesday, below.