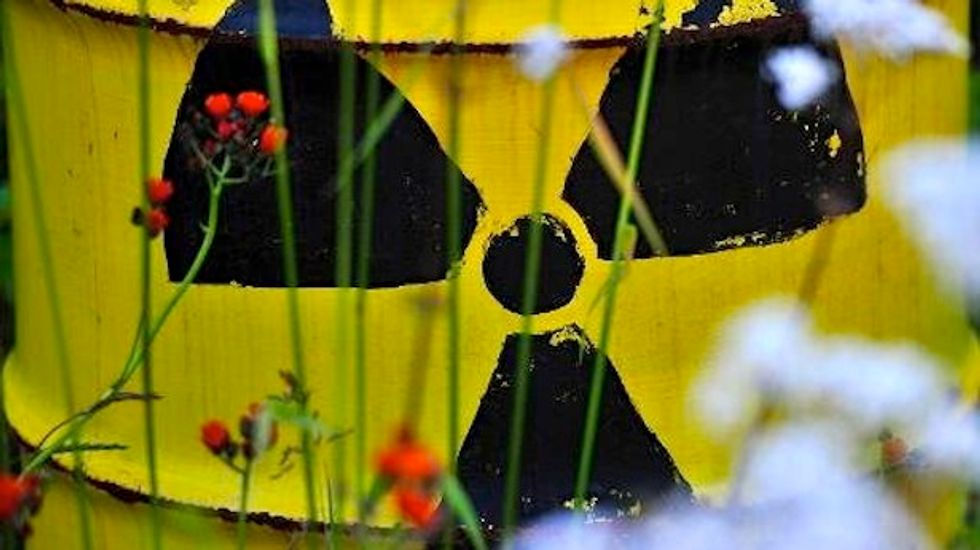 On Monday morning, three days short of her 84th birthday, Sister Megan Rice ate a hearty breakfast of pancakes and oatmeal at the ungodly hour of 4.30am in Knox county jail, Knoxville, Tennessee.

Rice, a white-haired Catholic nun and anti-nuclear activist, was in fine spirits, giving a broad smile and a thumbs-up sign through the glass partition that separates her from visitors to the jail where she is awaiting sentence, according to her good friend, Pat McSweeney.

McSweeney took Rice letters of support from the anti-nuclear community to bolster her spirits.

"Don't worry about me, I'm fine" Rice told her.

Rice was charged with federal sabotage, along with co-defendants Greg Boertje-Obed, 57, a carpenter, and Michael Walli, 64, a Vietnam veteran, for breaking into the Y-12 nuclear facility in Oak Ridge, and they will learn their fate on Tuesday when they appear before Judge Amul Thapar in a federal court in Knoxville, to be sentenced.

The charge of sabotage, under a statute of the US criminal code used against international and domestic terrorism, carries a maximum sentence of up to 30 years in prison.

In May, Judge Thapar suggested that their sentences will be more lenient than the maximum, saying that their non-violence would be relevant. But in the last month, the US government have turned up the heat on three.

William Killian, the US attorney for the eastern district of Tennessee, wrote to the judge asking him to reject any consideration of non-violence and setting out in stark terms how the US government views this white-haired octogenarian and her co-defendants.

If Thapar decides to accept Killian's recommendations, Rice could remain in prison for the rest of her life. The recommended sentence for Rice runs from 5.8 to 7 years, which would mean she would remain incarcerated until she was 90 or even 91.

In a letter written in November to the Guardian while in prison in Ocilla, Georgia, where she has been held for 8 months since the trial in May, Rice said she had no regrets about the break-in that led to her incarceration and potentially lengthy sentence. "Of course," she said, in reply to a question over whether it was all worth it, in the light of the prison time served and the severity of the sentence.

"We would not have prepared over years of education and reflection and awareness based on personal experiences by each of us".

Asked about the sabotage charge against her, she wrote: "I don't focus on any of this. It's all based on lies and denial of known true facts of history and science."

Rice – who joined the order of the Society of the Holy Child Jesus as a teenager – and her co-defendants describe themselves as the Transform Now Plowshares a reference to the passage in the Bible, Isaiah 2:4, which states: "They shall beat their swords into ploughshares, and their spears into pruning hooks: nation shall not lift up sword against nation, neither shall they learn war any more". Their actions, on 28 July 2012, were intended to highlight the vast gulf between the US's obligations under the Nuclear Nonproliferation Treaty to disarm and its ongoing activities and production of nuclear weapon components at the Tennessee facility.

She said she expected to go to prison, but cites her personal responsibilities under the Nuremberg principles for "committing only that which is the responsibility superseding all domestic and international laws; opposing and exposing crimes of government and contracting agents."

Rice believes the case against them will only serve to galvanise others into taking action. But her supporters and her family have deep concerns over the length of any prison sentence imposed.

Her niece, Megan Finnerty, who was at Knoxville on Monday to visit her aunt, said : "She's such a positive person and very spiritual. She always makes wherever she lands her home. But over time, prison is very gruelling. Breakfast is at four in the morning and it's not healthy food. When she was in Georgia she was always cold."

Finnerty said that while her aunt has never made an issue of her health, she has had heart and thyroid problems in the past. She recently heard, after Rice has been transferred from Ocilla to Knoxville, that she had an elevated white blood cell count. "I can't help but be concerned for her health and her life," she said. "Part of me is thinking, what if she gets sick? Who will take of her?"

To the US government, Rice, Walli and Boerje-Obed are "recidivists and habitual offenders", guilty of "very serious criminal offences" that "warrant serious sentences" according to Killian's memo to the judge. Rice has been arrested for civil disobedience related to the peace movement more than three dozen times and has served two previous six-month prison sentences, for trespass during protests against the former School of the Americas at Fort Benning, Georgia, that provides military training to Latin American government personnel.

If anything, Killian said, the sentences could be even harsher, citing a previous case where peace protesters, including Catholic priest, Father Carl Kabat, an anti-nuclear activist, got 18 years in prison for breaking into a military installation.

Rice and her fellow co-defendants actions and the ensuing publicity of their case has rankled with the government. They not only broke into one of the most sensitive and secure nuclear facilities in the country, thus exposing a security chasm, damaging credibility domestically and abroad, but they have showed no remorse, it said. Instead, Killian said, they "revelled in their violations", using it to gain publicity for their cause.

To her supporters, however, Rice and her fellow defendants are spirited peace protester, driven by a moral crusade against nuclear weapons.

Many of the hundreds of people who wrote letters to the judge or the further 11,000 who signed a petition pleading for leniency in sentencing believe their offences are akin to civil disobedience.

Even those who believe otherwise, including the Catholic order of the Society of the Holy Child Jesus, which supports Rice and the Roman Catholic teachings against nuclear proliferation, but does not condone criminal acts, believe that Rice has served enough time already.

A spokeswomen for the order told the Guardian: "The society has been hoping and praying for a reduced or suspended sentence, given her age, her health and her ministry."