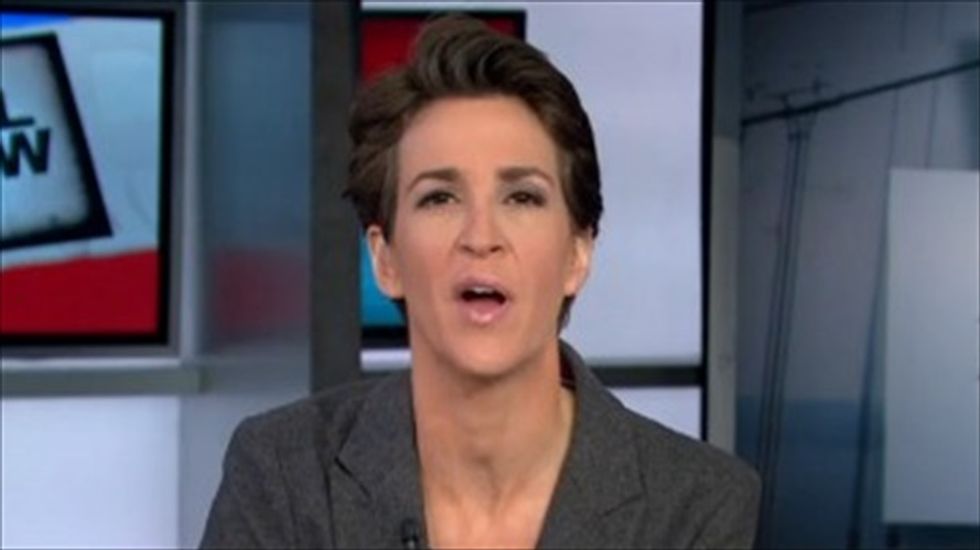 MSNBC host Rachel Maddow showed correspondence on Friday suggesting that several members of New Jersey Gov. Chris Christie's (R) staff and one member of his re-election team reacted supportively toward a Christie appointee's testimony before lawmakers that they knew misrepresented the state Port Authority's handling of the September 2013 closures on the George Washington Bridge.

Maddow played audio from the agency's former deputy executive director, Bill Baroni, telling members of the state legislature in November that the Port Authority was monitoring the effects of the lane closures and that they did not impact emergency medical services in the area, even though documents show Baroni had been notified at the time that this was not the case.

Shortly after testifying, Baroni was told via text message by another Port Authority appointee, David Wildstein, that deputy chief of staff Bridget Anne Kelly -- who ordered Wildstein to orchestrate the closures -- and another person, possibly Christie campaign finance chief Nicole Davidman Drewniak, "were VERY happy" with his performance.

"The documents we have so far indicate that not just Governor Christie's office, in the form of Bridget Kelly, applauded and said, 'We're really happy with that false testimony,' even though Bridget Kelly was in a position to know it was false testimony while she was applauding," Maddow said. "But now we also know that a person who appears to be a staffer from the governor's re-election campaign, 'Nicole,' said the same thing."

All four people mentioned in the text messages between Wildstein and Baroni -- who have since resigned from the agency -- were among the members of Christie's staff and re-election team issued subpoenas on Friday.

"As sprawling as this scandal and this investigation have become, [investigators] are much more tightly focused than we knew on the governor himself and his immediate staff," Maddow said. "This is not a far-flung investigation into 'how politics is done in New Jersey,' which is some of the way it's been covered in the national press. At least so far, from what we can tell about the scope of the investigation, this is about Chris Christie."

Watch Maddow analyze the subpoenas and Baroni's false testimony, as aired Friday on MSNBC, below.