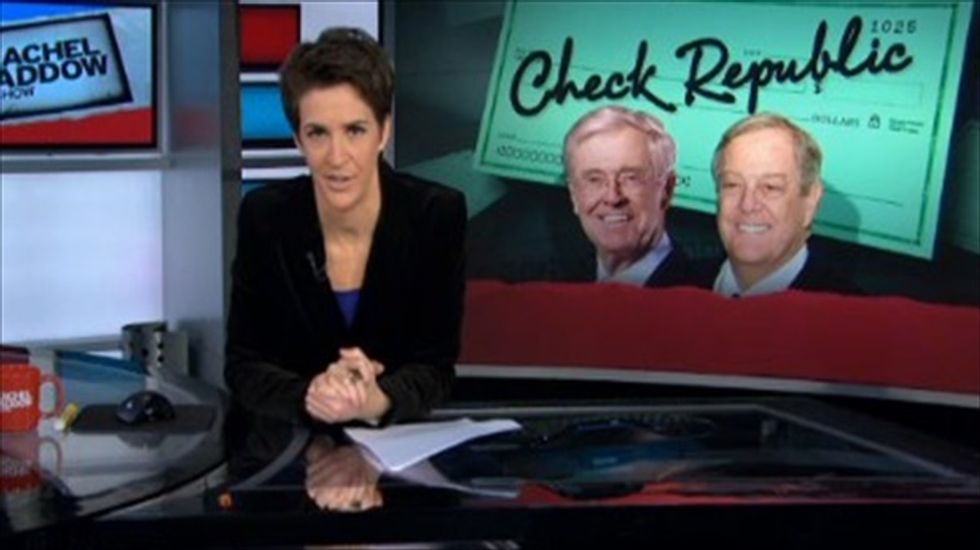 MSNBC host Rachel Maddow reaffirmed her promise to keep reporting on the financial and political activities of groups connected to conservative billionaires Charles and David Koch while revealing new information backing up her story about a Koch-affiliated group that has been pitching Florida's drug test law for welfare recipients around the country.

The Foundation for Government Accountability, Maddow reported, is among the organizations that takes Koch summer internship participants through the State Policy Network, a coalition of think tanks.

Maddow played February 2013 audio describing how students in the Charles G. Koch Summer Fellow Program can search online for places to work, with the Florida-based foundation coming up among southern organizations.

Earlier this month, attorneys for the Kochs sent Maddow a script they wanted her to read disavowing her reporting, a missive she dismissed on-air, stating, "I don't play requests." When asked about this latest connection, a Koch spokesperson accused Maddow of "shifting the focus to a new line of flawed reasoning."

Despite being struck down in court on Dec. 31, Maddow said, the law is part of Gov. Rick Scott's (R) re-election campaign, amid a renewed push by the Kochs and their Republican backers to get more closely involved with state primaries and tightening control of their vast, opaque network to avoid "freelancing" from their operatives.

Politico also reported that the Kochs convened their annual secretive strategy meeting in Palm Springs this past weekend still reeling from both setbacks in the 2012 election season and a record $1 million fine levied against two of their allies in Arizona.

But beyond the fights with the Kochs over individual group activities, Maddow said the effort to uncover how deep their networks run is important in keeping the Kansas residents from succeeding in their attempts to influence American politics from the shadows.

"I say we [report on them] anyway," Maddow insisted. "It's our country, too, even if we don't get invited to your billionaires' party in Palm Springs every January."