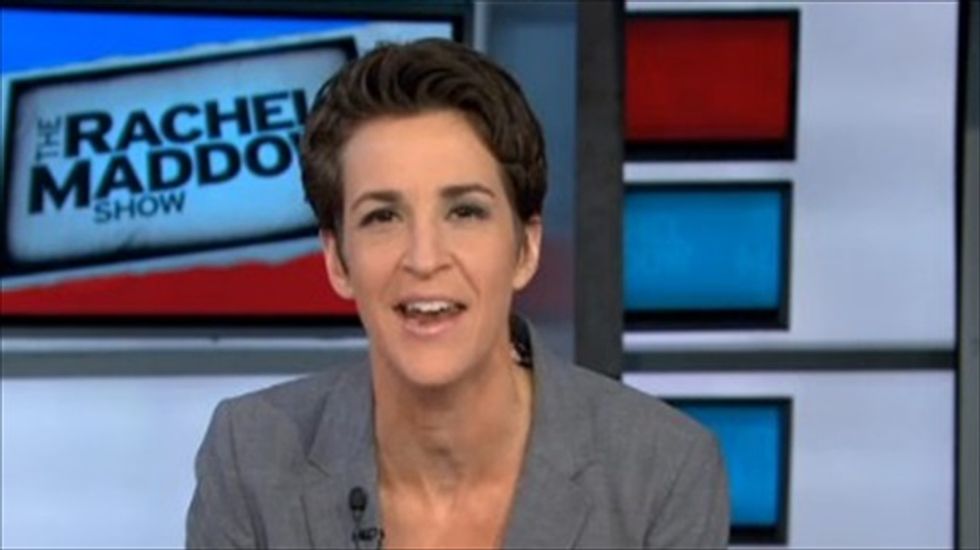 Rep. Michael Grimm (R-NY) may be famous in the wake of his belligerence toward a reporter, MSNBC host Rachel Maddow said Wednesday night, but he's only the latest in a parade of New York state lawmakers making lurid headlines.

"When it comes to New York, and New Jersey as well, it is hard to stress just how bipartisan -- let's say non-partisan -- a disgusting cesspool of public corruption and terrible behavior this really is," she said. "It's almost heartening, in a way, right?"

Maddow said "nearly half" (actually 32) state lawmakers have been arrested, convicted or otherwise gotten themselves into trouble -- enough that the New York Times saw fit in May 2013 to create a "rogues gallery" listing the various offenders that have been identified since 2006.

"At one level, it's kind of nice," she mused. "Men, women, white, Black, young, old -- New York and New Jersey politics are an equal-opportunity den of iniquity."

The kinds of people preceding Grimm, Maddow reasoned, gave new context to his threat to reporter Michael Scotto that he would "throw [him] off this f*cking balcony" and that he would "break [Scotto] in half. Like a boy."

Scotto's questioning, she said, cut to the heart of his upset 2010 election win and surprising fundraising totals, which led to a grand jury investigation two years later. Fundraiser Diana Durand was also arrested by federal officials earlier this month on charges of illegally plying his campaign coffers.

"On one level, it is just an amazing spectacle that this happened," Maddow said. "That the way some New York politicians are used to behaving leaked onto television."