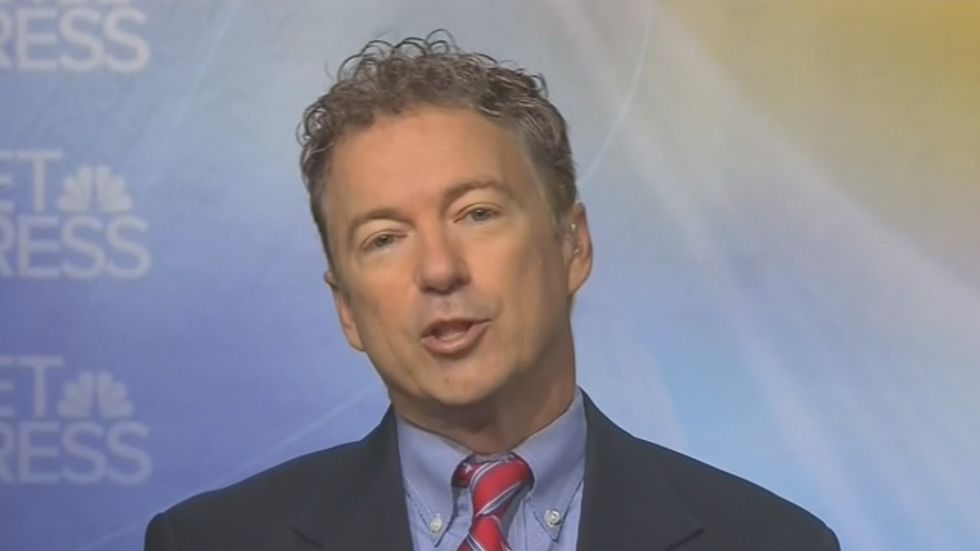 Sen. Rand Paul (R-KY) on Sunday declared that the so-called Republican war on women was over and women had "won," but a new war was being waged by women who were taking jobs from men.

"We have a lot of debates in Washington that get dumbed down and are used for political purposes," Paul told NBC's David Gregory. "This whole sort of war on women thing, I'm scratching my head because, if there was a war on women, I think they won."

As evidence, the Kentucky senator pointed out that none of the women in his family were complaining about inequality or having their health care rights curtailed by Republicans.

"You know, I don't see so much that women are downtrodden, I see women rising up and doing great things," he remarked. "In fact, I worry about our young men sometimes because I think the women really are out-competing the men in our world."

Paul added that he tried to never talk about the female anatomy and that Republicans did not start the war on women "debate."

"The facts show that women are doing very well, have come a long way," he explained. "And I have a lot of successful women in my family. And I don't here them saying, 'Oh, woe is me, this terrible misogynist world.' They look out and they're conquering the world."

Paul later suggested that for President Bill Clinton was responsible for the "war on women" because he had an affair with an intern while he was in office during the 1990s.

"The media seems to have given President Clinton a pass on this," Paul insisted. "There is no excuse for that, that is predatory behavior and it shouldn't be something -- we should't want to associate with people who would take advantage of a young girl in his office."

"I think in my state, people tend to frown upon that," he declared. "If there were someone in my community who did that in my community, they would be socially -- we would disassociate from somebody who would take advantage of a young woman in a workplace."