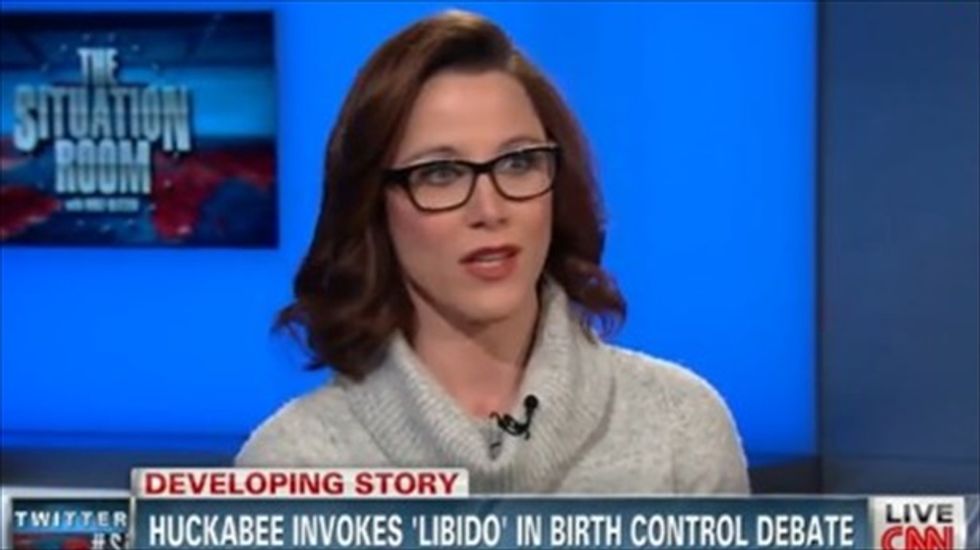 "On this particular incident, I gotta tell you, I feel like I'm in The Twilight Zone," Cupp told colleagues Stephanie Cutter and Wolf Blitzer. "It is so 100 percent clear to me that Mike Huckabee was talking about the Democratic treatment toward women and not his own feeling, or the Republican Party's feeling about women. I have never seen lazier, more intellectually dishonest analysis of this moment than I have today."

Huckabee was roundly criticized for the way he challenged GOP members on Thursday to reject the "War on Women" label attached to their policies regarding reproductive health, saying Democrats had made women believe that "they are helpless without Uncle Sugar coming in and providing them for them a prescription each month for birth control because they cannot control their libido or their reproductive system without the help of government."

"I don't understand where Republicans come into this," Cupp insisted on Friday.

"The facts of the policy are that 98 percent of women have used contraception," Cutter responded. "The majority of women actually use it for non-contraceptive purposes like preventing cancer, endometriosis or basic health care needs. And Republicans are against the contraception benefit in the Affordable Care Act."

Huckabee's remarks, Cutter said, did not help Republicans' standing on the issue, with the debate surrounding them stretching into two days.

"This is not an isolated incident," Cutter told Blitzer, as Cupp interrupted. "There's a long history of these comments."

"Because Republicans are even going along with this made-up media narrative," said Cupp, who was not present on Thursday when Rick Santorum discussed the remarks on her show. "I cannot believe even Republicans are allowing and accepting this narrative to go on."

Watch the discussion, as aired Friday on CNN, below.