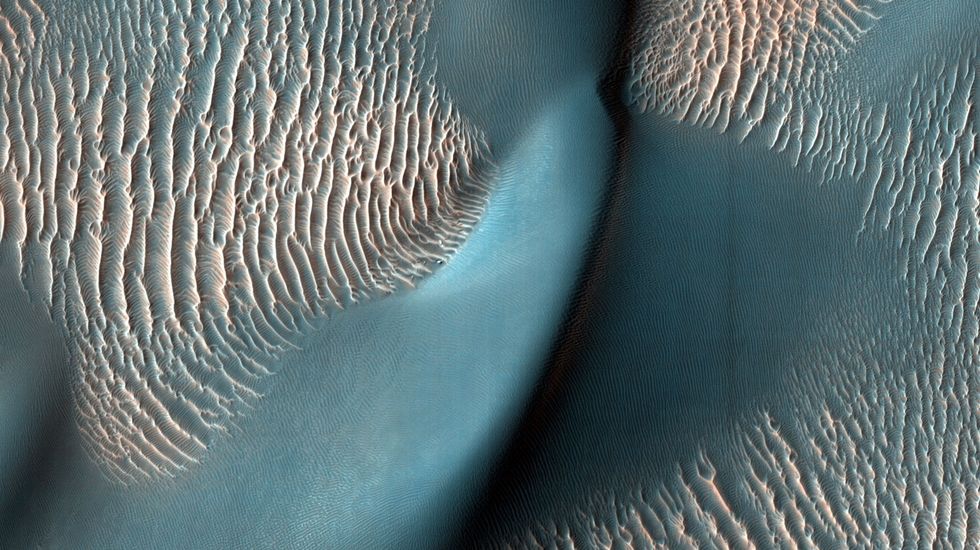 Which way doth the wind blow today? When you are in the desert the sand dunes contain the answer. Each grain of sand is whipped into place by the wind, and if you know how to read it, every sand dune tells the story of the weather that made it.

Reading sand dunes is not easy, but a group of scientists, led by Clément Narteau of the Global Institute for Physics in Paris have made a leap forward, by watching sand dunes grow from scratch. In 2008 they used a bulldozer to flatten 160,000 square metres of sand dunes in the remote Tengger desert of Inner Mongolia. Over the next three-and-a-half years they measured the winds and recorded the shape, size and orientation of the newly forming sand dunes.

They found that the resulting dune shapes were controlled by two prevailing winds, which whistle across the Tengger desert at different times of year. Writing in the journal Nature Geoscience (DOI: 10.1038/ngeo2047) they describe how the sand grains aligned themselves perpendicular to each individual wind, ultimately creating sand dunes orientated mid-way between the two prevailing winds.

Narteau and his colleagues think they can use their new understanding to deduce the prevailing wind directions and speeds that created dune fields on other planetary bodies. First up they plan to analyse the significant dune fields on Mars and Titan – Saturn's largest moon. Such information could significantly improve the chances of successful landings on future exploratory missions.