The 10 most subversive women artists in history 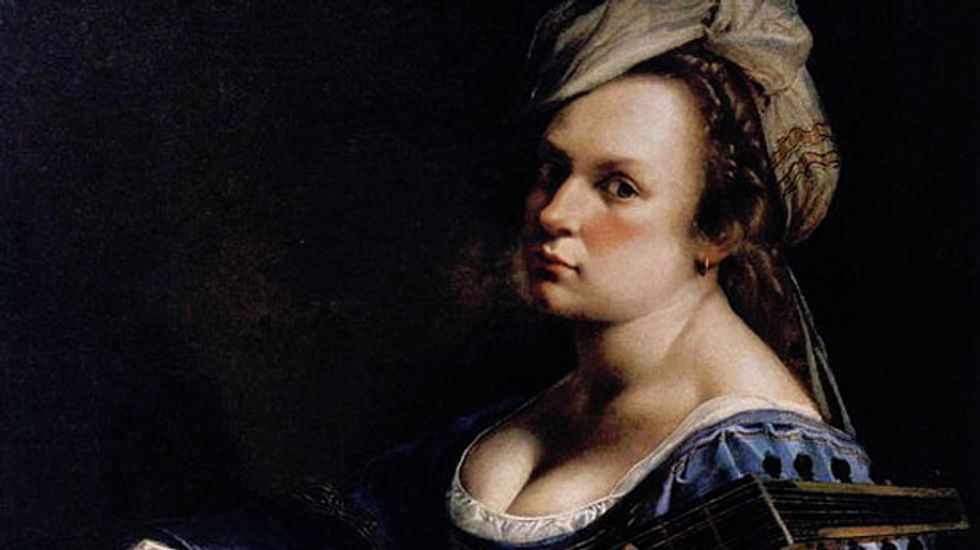 When she was a teenager, this 17th-century baroque artist was raped by a painter. She responded by turning her art into a weapon. In Gentileschi's repeated paintings of the biblical story of Judith slaying Holofernes, the Israelite hero is helped by her muscular servant. As one woman holds down Holofernes on his bed, the other saws through his neck with a sword. Blood spurts everywhere in a sensational image of women taking revenge on patriarchy.

In her SOS Starification Object Series (1974-82), Wilke was photographed with blobs of chewing gum stuck on to her flesh. Dotting her face and bare body, these bizarre markings resembled a modern form of tribal scarification (this was before ritualistic body modification became fashionable) and resemble vaginas. Or are they eyes? Wilke's "starification" marked her with the burden of being objectified by the male gaze.

In her Catalysis performances (1970), Piper turned herself into a human provocation in public places such as the New York subway. In one performance, she rode the subway after soaking her clothes in pungent substances for a week to make them stink. She muttered in the street, entered the elevator of the Empire State Building with a red towel stuffed in her mouth or simply made eye contact with strangers. Her purpose was to dramatise social unease and ultimately the unspoken tensions of race in America.

In the early 20th century, Georgia O'Keeffe posed nude for her lover, the modernist photographer and art impressario Alfred Stieglitz, and painted abstractions that have an explicitly vaginal beauty. Compared with some artists in this list she may seem soft, but her cussed exploration of her own body and soul mapped out a new expressive freedom for women making art in the modern age.

In photographs taken from the 1920s to 1940s, this French artist often portrays herself in male clothes and hairstyles, contemplating her own transformed image as she experiments with the fictions of gender. Cahun's pioneering art is typical of the freedom the surrealist movement gave artists to question sexual and social convention.

The labyrinthine mind of the last great surrealist envelops the spectator of her art in memories of an early 20th-century French childhood, intense secret worlds and the very interior of the body. Collapsing the masculinist art form of sculpture into something organic and ripely carnal, she is the spider of subversionweaving a web that has transformed the very nature of art.

Art exploded in the early 20th century into the revolutionary fragmentations of cubism and its spinoffs. Popova claimed the freedom of this new art for her fractured visions of Russian life. Working on the eve of the Russian revolution, she took apart the traditional subjects of art with ruthless scientific skill. In her1915 painting The Model, a nude becomes a gigantic tower of blocks as the conventions of gender disintegrate.

In her Untitled Film Stills, this contemporary Arcimboldo endlessly remakes her image and reimagines her identity. Sherman's insight is that the self is created by storytelling. From early black-and-white photographs in which she poses as a Hitchcock heroine in unresolved scenes from films we almost recognise, to later works that more violently transfigure her features with monster makeup, Sherman evokes the tales that shape who people become.

Does art have to be public? Does it have to be political or progressive? Woodman's haunting photographs are subversive in a quieter and stranger way. She used her art to explore a secret world. Poetic reveries in silent rooms, fleeting glimpses of a rich inner life make for an art that suggests the freedom of the introspective self.

The honeycomb yellows and urine golds of Hesse's synthetic yet organic-seeming materials make you intensely aware of possessing a body packed full of strange stuff. Where men had built statues for centuries and then arranged steel girders in the macho arrangements of minimalism, her sagging, hanging sculptures reveal other dimensions to the physical world. For Hesse, mind and body are not separated in a hierarchy. We too are stuff.