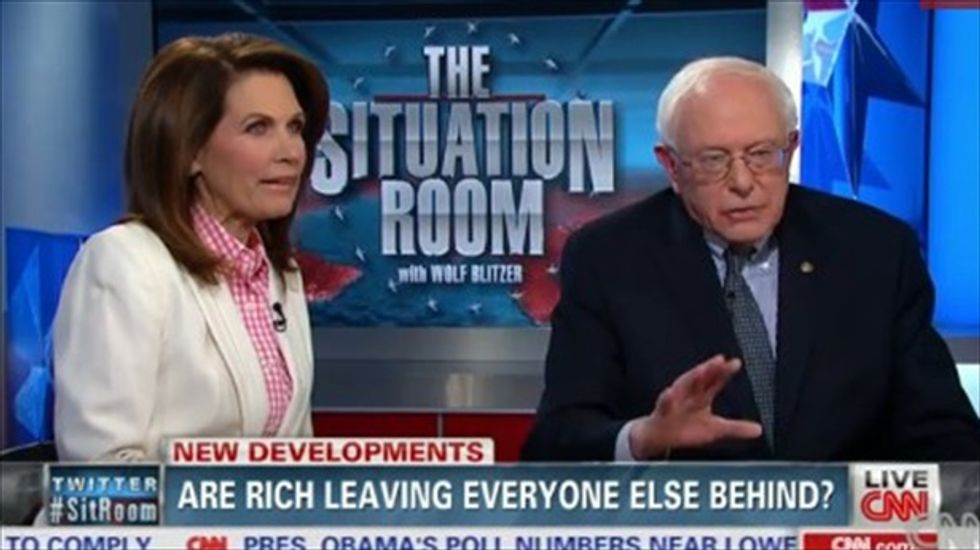 A debate between Rep. Michele Bachmann (R-MN) and Sen. Bernie Sanders (I-VT) regarding income inequality on Monday degenerated into arguments regarding several other topics, with the two lawmakers constantly interrupting each other and Bachmann refusing to entertain the very phrase.

"We need growth, we need prosperity," Bachmann told CNN host Wolf Blitzer before mentioning a segment he aired concerning an unemployed woman identified as Anne. "A job is what she wants. That's the dignity that she needs and the opportunity for a way out."

At one point, Sanders accused Bachmann of wanting to cut Social Security.

"That's absolutely a lie," Bachmann responded, not mentioning that in 2010 she called the program "a tremendous fraud" in 2010 and supported Rep. Paul Ryan's (R-WI) program in 2011 that called for doing just that. "This is the old canard that's trotted out all the time."

"Do you support chained CPI?" Sanders asked repeatedly, referring to the less-generous way of calculating Social Security benefits that has gained tentative support from President Barack Obama's administration, much to his chagrin.

However, Bachmann refused to answer, instead insisting that she did not want to cut Social Security.

"It is a joke for the Democrat [sic] Party to lie about what our position is," she said.

"I asked you a question," Sanders pressed. "You didn't give me an answer."

Watch the debate, as posted online on Monday, below.