Bill O'Reilly complains: If I ask about Benghazi, 'I'm a doofus, a scandal-monger' 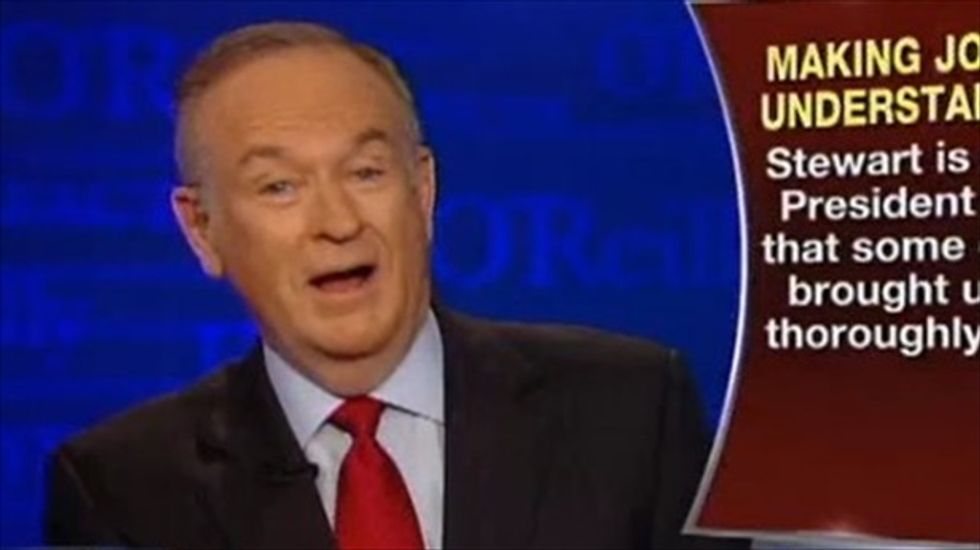 Fox News host Bill O'Reilly shot back at The Daily Show's Jon Stewart on Wednesday, challenging Stewart to appear on his show -- saying "he owes me an appearance" -- and accusing Stewart of pooh-poohing legitimate concerns on his part.

"Mr. Stewart echoing what President [Barack] Obama said," O'Reilly said. "That some of the issues I brought up have been 'thoroughly investigated.' Of course, that's a farce."

On Tuesday, Stewart accused Fox of using topics like the Benghazi terror attack, the debunked allegations of Internal Revenue Service officials "targeting" Tea Party groups and the rollout of the Affordable Care Act as rotating "distraction" points whenever Obama brought one of them -- or any other issue -- up for discussion.

"I know -- and you probably know, too -- that these issues aren't important to Jon Stewart, or even to the president," O'Reilly said on Wednesday. "They don't see them as vital, because they don't pertain to social justice, or global warming. So, if I ask about those issues, I'm a doofus, a scandal-monger."

Then, promising to "speak slowly" for Stewart's benefit, O'Reilly repeated his assertions that there are "allegations" that Obama lied about the Benghazi assault, and that the medical law was being "forced" upon Americans. O'Reilly did not mention that several states have already exercised the option of choosing to reject the state healthcare exchanges enacted under "Obamacare."

"Are you hearing me out there in left-wing fantasyland?" O'Reilly said. "Good grief."

Watch O'Reilly's commentary, as posted online on Wednesday, below.