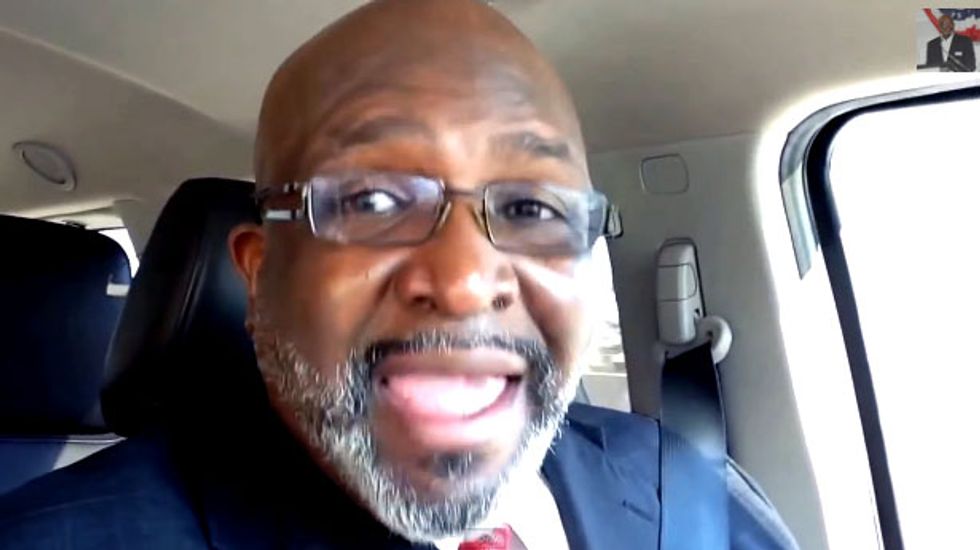 A black Republican candidate who hopes to represent Georgia in the U.S. Senate railed against the "bigoted" GOP in recently published videos.

Derrick Grayson, an engineer and minister, regularly uploads videos to YouTube of himself speaking about various topics while driving. Grayson, who is running to replace retiring Republican Sen. Saxby Chambliss, describes himself as a "Ron Paul Republican" in his videos, and often attacks the Republican and Democrat "royals."

In two videos uploaded on February 15, the Senate hopeful lashed out at the Georgia Republican Assembly for excluding him from a recent straw poll, saying it was a symbol of a larger problem within the Republican Party.

"Now this is not the press doing the exclusion," he said. "Remember, if you listened to me in the last debate in my closing remark... I pointed out the GOP is the one who has a mandate for more inclusion. I said don't talk to me about inclusion when you have a party that sits silent at the shenanigans of the press at the behest of their corporate owners and these shoe-string-dangled reporters that do their bidding. Here this is an organization, a Republican organization, engaged in the same shenanigans. So, it is not the press."

"I'd like to see what the GOP is going to say to them. 'Hey, dammit, didn't we tell you we had a national mandate to be more inclusive, don't you know that we lost the last damn race because of the black vote? What are you trying to do? Hurt us even more?' It makes you wonder."

Grayson said the Georgia Republican Assembly was probably "full of a bunch of damn bigots" and "racists." He warned that minority candidates would continue to be sidelined unless people stood up to the Republican Party, the media, and other conservative organizations that engage in "flagrant bigotry and exclusion."

"I'm coming and they can't stop me whether they like it or not," Grayson concluded.

In a second video, the Senate hopeful stated he finds the term "African-American" offense and doesn't celebrate Black History Month because it was instituted to pacify black people. He then continued his criticism of the Georgia Republican Assembly.

"I don't go to the press and asked them to cover me," Grayson remarked. "Only thing I've ever said was they ought to tell the damn truth. And I'm not going to go to the GRA and ask them to retract what they did. Now I know who they are and what they are. I can deal with the enemy I can see, and that is that. So I don't give a damn if you didn't put my name on the poll, it does not make me matter less."

He said the situation reflected a problem within the GOP.

"How can you call for a national mandate to be more inclusive, yet you've got these organizations running around under the mantle of the Republican Party, the GOP, yet they engage in such nonsense? No wonder many black folk don't want to have a damn thing to do with you."

In a statement on its Facebook page, the conservative group insisted it did not purposefully exclude Grayson.

"Let us also be clear we are a separate organization from the Georgia Republican Party. The GRA is a separate grassroots organization with a diverse membership that edifies principled Republican participation by all," they wrote after Grayson published his videos.