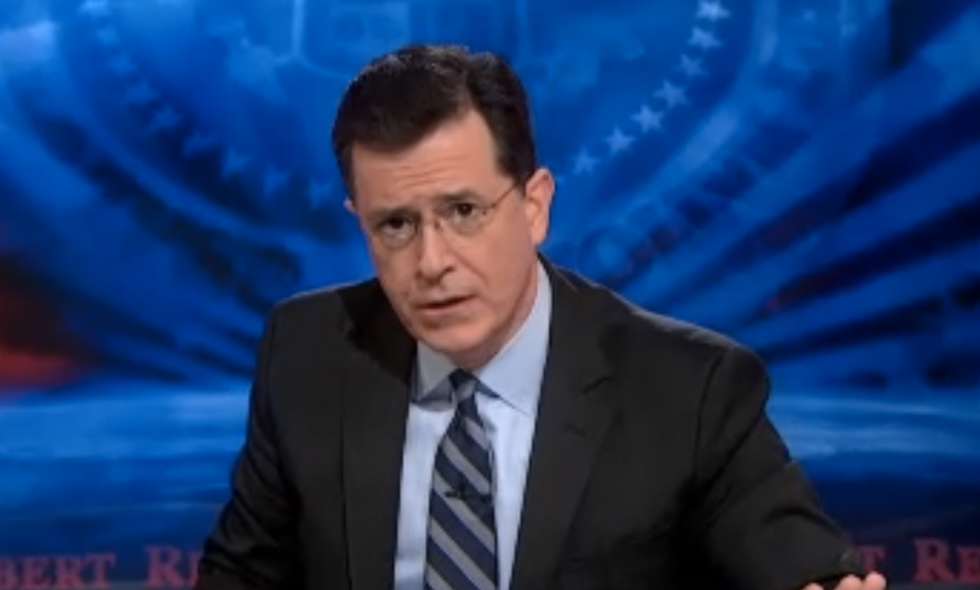 Thursday night on Stephen Colbert's "Colbert Report," the host poked fun at Fox News anchor Bill O'Reilly, who has realized that Colbert is mocking his auction of the notes from his pre-Superbowl interview with President Barack Obama.

Last week, O'Reilly made the announcement that he would be selling his single page of handwritten notes  -- signed by both O'Reilly and Obama -- from the contentious Fox interview and donating the proceeds to charity. Colbert followed up by announcing that he too is having an auction for the microwave oven that he purportedly stole from the green room at Fox.

Colbert announced that there has been a "huge misunderstanding" between himself and his "broadcast life partner" O'Reilly. Bill has failed to comprehend that the microwave auction is, Colbert said, "an homage" to Papa Bear O'Reilly.

O'Reilly, on his show, thanked Colbert for the publicity but said that Colbert himself is a "Well," he said, "I'm not gonna say it."

Looking shocked and hurt, Colbert responded, "Bill, if you're watching, you should know that you really hurt me. And if you're not watching? That hurts me even more."

"I wasn't mocking you," he continued, "I was celebrating you. Just taking some of the weight off of your shoulders. Why does it always have to be you talking about how great you are?"

After Colbert mentioned O'Reilly's auction on the air, bids skyrocketed for the notes to "an astonishing $9,999,999," but then dropped back down to around $30,000 when, shockingly, "The Bone Ranger" turned out not to be a legitimate bidder.

"Bill?" said Colbert. "With all due respect, you're an idiot."

"But please, Bill," Colbert asked the Fox pundit, "sign my microwave? Otherwise, you're going to look like a real...not gonna say it."