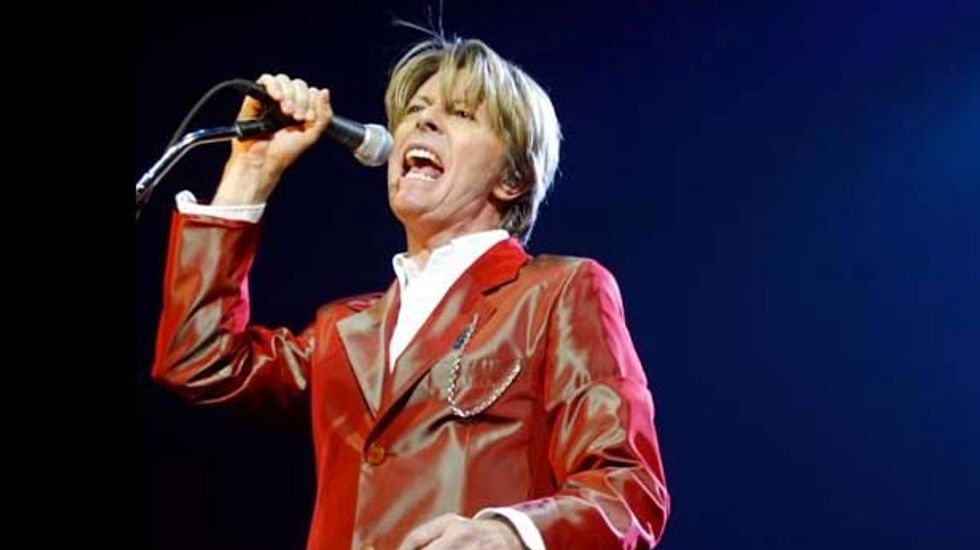 Bowie, 67, was not present at London's cavernous O2 Arena Wednesday to receive his best British Male Solo Artist award -- his first Brit prize since 1984 -- but sent a message read out by supermodel Kate Moss.

"I'm completely delighted to have a Brit for being the best male -- but I am, aren't I Kate?" the model said on his behalf.

"I think it's a great way to end the day. Thank you very, very much and Scotland stay with us," he added, in reference to September's upcoming independence referendum.

Bowie, who made an unexpected comeback last year with album "The Next Day", surpassed Welsh crooner Tom Jones, who received an honorary prize for his outstanding contribution to music in 2003, aged 62.

Oasis guitarist Noel Gallagher, who was co-presenting the award, laughed off Bowie's absence, saying: "You maniacs didn't think he'd actually be here. David Bowie's too cool for that."

But it was Sheffield four-piece Arctic Monkeys who claimed the highest honours, becoming the first band to win the coveted best Album and British Group awards for a third time.

The indie foursome burst onto the scene in 2005 with debut single "I Bet You Look Good on the Dancefloor", and have since developed a harder edge, as demonstrated on critically acclaimed fifth album "AM".

"Yeah that rock and roll -- it seems like its fading away sometimes, but it will never die," frontman Alex Turner said on accepting the award.

Speaking backstage, he added: "It feels wonderful. It's wonderful to receive that acknowledgement on a night that celebrates British music."

The band opened proceedings with a live performance of "R U Mine?", before US pop royalty Prince took to the stage to present singer Ellie Goulding with the British Female Solo Artist award.

The diminutive "Purple Rain" star -- on tour in the UK -- thanked London for making him feel "extra special loved," adding it had been "wonderful", before posing for a "selfie" with host James Corden.

Teen heartthrobs One Direction won the best video prize for their single "Best Song Ever", and earlier signed autographs for hordes of fans as they made their way down the red carpet.

It was the first time the best video award had been decided by social media, with voting open to fans around the world on YouTube in a bid to boost its international status.

The group earlier won the award for the world's biggest British act, but had to go on stage to collect the prize without band-member Harry Styles, who later claimed he was "having a wee" when the announcement was made.

US star Pharrell Williams and legendary pop songwriter Nile Rodgers brought the night to a close, performing a medley that included "Get Lucky", their joint smash hit with Daft Punk.

The enigmatic French duo were earlier named best International Group, which Rodgers claimed on their behalf.