Despite anti-LGBT laws, it's business as usual in Sochi's Club Mayak gay bar 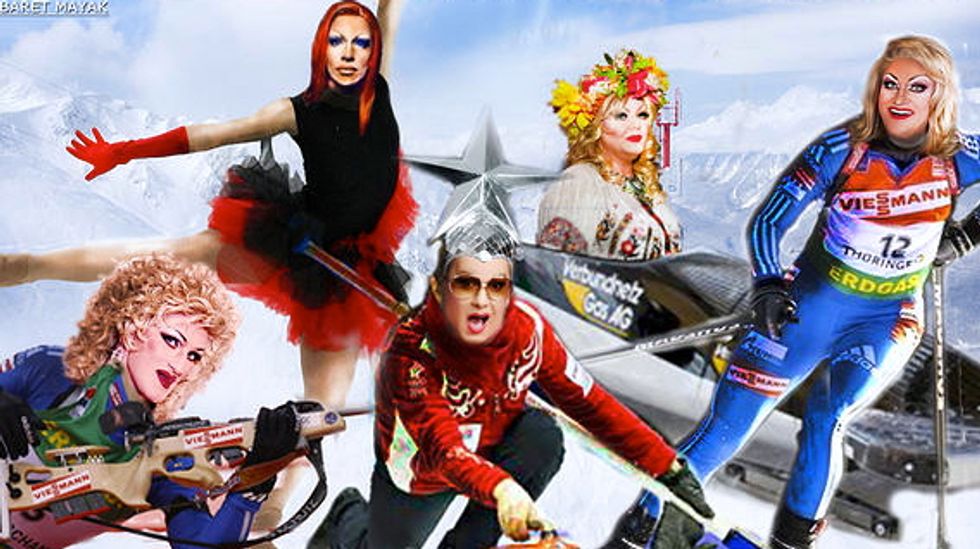 It was the early hours of Sunday morning and business was brisk in Sochi's only gay nightclub. Suddenly the lights went out and a policeman burst into the room, interrupting the drag queens' cabaret and shining a torch at the customers.

But as the lights came back up the man began to strip off until he was wearing nothing but the skimpiest of thongs. Soon he was thrusting his pelvis to the strains of "I like the way you move", and the revelry resumed.

The Mayak cabaret has an exclusive clientele. Its presence is announced by a small, discreet sign and patrons have to ring the bell to be let into the club, which this Saturday was packed with gay, lesbian and a few straight couples. Rainbow flags flutter on the bar, a drag queen in a peroxide wig runs the cloakroom, and the waiters wear leather shoulder pads over naked torsos. On stage, the absurdly camp acts are given an Olympic twist – one drag act is introduced as "gold medallist for blow jobs".

The regulars at Mayak say they have no trouble from police or skinheads in Sochi, a relatively tolerant city by Russian standards. Indeed, the only unwelcome visitors these days are foreign camera crews, nightly visitors thrusting their cameras into the face of punters and demanding to hear their horror stories.

As the winter Olympics have come to town, Russia's law banning "gay propaganda" has become the most controversial issue, with calls for a boycott of the games by some western gay activists and a number of world leaders staying away in protest, at least partly over the gay laws.

The huge international pressure over the law, which bans the dissemination of information about homosexuality to under-18s, and outlaws speaking about gay and straight relationships in equivalent terms, has caused something of a split in Russia's gay community. Some people welcome the attention that has been given to the issue, while others feel it can be counterproductive. There are few openly gay people, and since the law has been enacted, there has been an increase in homophobic violence and vigilante attacks on gay people. But some feel the international rhetoric has gone too far.

"It's a very difficult question," said Anton Krasovsky, a gay television presenter who lost his job after coming out live on air. In a column in the Guardian last May, he wrote that the time for gay people to become courageous and stand up for their rights had come. Now, though, he said it was hard to evaluate whether the huge international pressure had helped.

"I think any kind of hysteria is bad," he said. "Putin is not Hitler. Sochi is not Berlin 1936. When I read the calls for boycotting the Olympics I was absolutely disgusted."

The pair later admitted that their lesbian act had been a marketing ploy to sell records – they both ended up in straight marriages. But during their performance, the two women came on stage holding hands, and wore similar schoolgirl outfits to those that they wore in the 2002 song All The Things She Said, which featured rain-drenched sapphic canoodling.

Lena Katina, one member of the duo, said the pair had not been told why they were invited, but thought it was because they were one of the few Russian bands known internationally, rather than due to their lesbian stylings.

She added that were the duo to release their songs now, they could be found to be in violation of the gay propaganda laws, and said that things in Russia had become much stricter. She thought it was unfortunate that the law meant that people felt they had to live a secluded life.

"We have a lot of people, even now, who write to us and say that our music and vidoes saved their lives, or helped them to feel normal and not sick. That can only be a good thing."

She said that her gay friends were split when it came to what to do about the law: "Of the gay people I know, some of them are very unhappy and very aggressive about the law, while other people are going about their lives quietly, and don't pay attention."

On Sunday Patriarch Kirill, the head of the powerful Orthodox church, made more comments on the gay issue, strongly opposing gay marriage. "Never before in human history has an attempt been made to legalise a sin."

During the Olympic opening ceremony a small group of gay activists attempted to sing the national anthem while carrying rainbow flags in Red Square, Moscow, and were promptly detained by police. But the tiny number of people who attended the protest was telling.

"I honestly don't know," said Krasovsky. "I don't agree with the hardcore activists, but then I understand that without the hardcore, we could end up being really screwed. Part of the problem with Russia is you just don't know where this is going and what will happen in two months or two years."

Andrei Tanichev, Mayak's owner, said: "It's a complex question, whether or not all the noise in the west about the issue has been good or bad. On the one hand, it is very good that it has forced people in Russia to think about gay rights properly. On the other hand, I think the level of noise has been greater than the size of the problem."