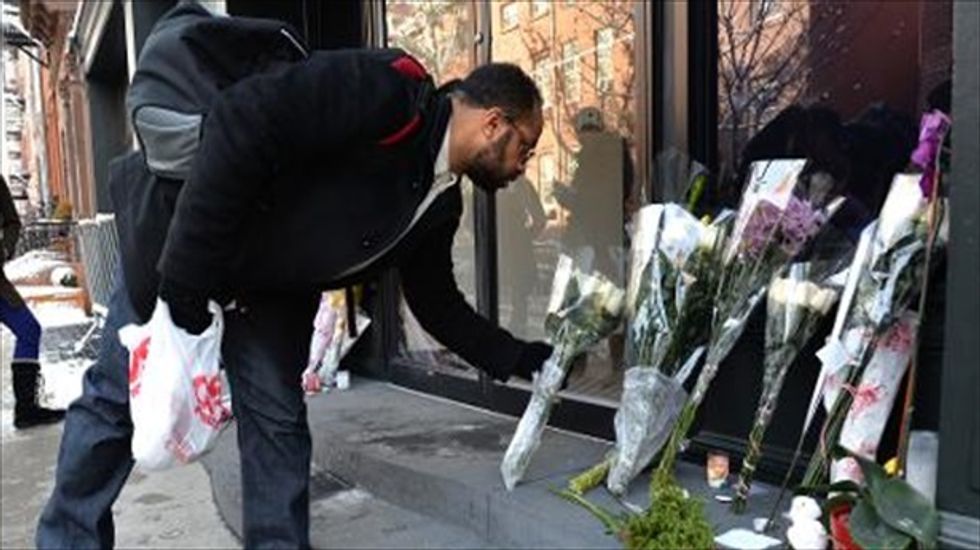 Forrest Young places flowers at a makeshift memorial for actor Philip Seymour Hoffman at the entrance to the apartment building where he died on Feb. 4, 2014 [AFP]

Subdued fans laid roses, photographs and beer outside the apartment of Oscar-winning American actor Philip Seymour Hoffman on Tuesday two days after his death from a suspected overdose.

The results of an autopsy on the 46-year-old star are expected to be made public as early as Tuesday, but tests have already concluded that Hoffman was in possession of heroin when he died.

The sudden death of the 46-year-old father of three young children, hailed by many as the finest character actor of his generation, has shocked Hollywood and devastated his family.

In a career spanning more than 20 years and 50 films, Hoffman mesmerized filmgoers with his portrayal of some of the most repellent and yet electrifying characters of the silver screen.

"Your 'Death of a Salesman' was the most magical night I've had at the theater. Rest in peace," said an anonymous, handwritten note laid with a white rose on the step of his New York building.

Hoffman was nominated for his third Tony Award for his portrayal of Willy Loman, the main character in American playwright Arthur Miller's work which he performed on Broadway in 2012.

Police said he was found on the bathroom floor, a syringe in his arm, wearing shorts and a T-shirt, in the apartment he rented at 53 Bethune Street in the West Village.

According to US media, at least 50 envelopes of heroin littered the $10,000 a month rental.

A solitary policewoman stood guard outside the address on Tuesday as a trickle of fans continued to bring bouquets, candles, photos and even a toy snowman.

Forest Young, a 38-year-old designer and amateur actor, left a bunch of flowers and stood in silence for a long time without speaking.

"I came to pay respect. I hope he will be remembered for his work and also the commitment he gave to the craft, his movies and the way he touched people," he told AFP.

"You cannot ask more than that from an artist. I'm really sad but hopefully it will be give some kind of inspiration to me."

Young says he was aware that Hoffman struggled with addiction.

"I think all the great artists explore the edges of human condition. They do so because they can," he said.

Hoffman had admitted in May to falling off the wagon more than a year previously, after two decades of sobriety, starting with prescription pills and escalating to snorting heroin.

Anna Zekan, a 22-year-old dance student, stopped to take photographs and said she could not believe he was gone.

"He was very public about his struggle but you never expect anything to happen to someone who is so succesful and is working so well," she said.

In the West Village, one of the most expensive neighborhoods in Manhattan, Hoffman kept a low profile and was respected as a doting father to his three young children.

His partner, designer Mimi O'Donnell, who reportedly kicked him out around Christmas because of his drug addiction, lives with their children nearby on Jane Street.

He often used to take his children to the Chocolate Bar, a small, warm, smart cafe on Eighth Avenue, where staff said politely but firmly that they did not want to comment.

On Monday, Australian actress Cate Blanchett, who starred with Hoffman in "The Talented Mr Ripley" was seen arriving at Jane Street laden with gifts for the Hoffman children.

The actor was last seen on Saturday and O'Donnell raised the alarm when he failed to show up to see his children on Sunday.

She was quoted by US media as saying he was high when she last saw him and spoke to him on Saturday.

Broadway announced that it would dim its lights for one minute at 7:45 pm on Wednesday in memory of the celebrated actor.