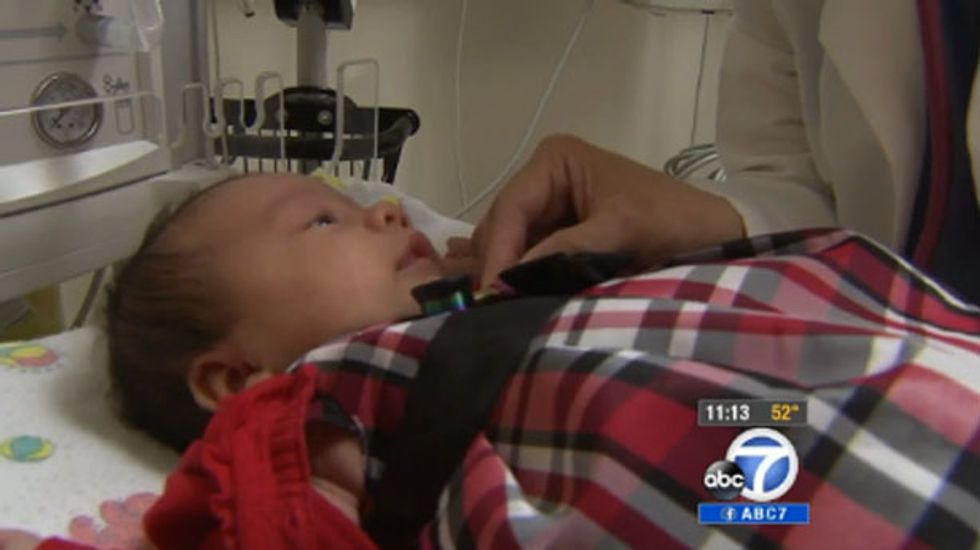 A baby delivered at the University of California, Irvine Medical Center had lost about 80 percent of her blood due to a rare condition known as fetal-maternal hemorrhage.

Hope Juarez was described as "ghost white" when she was delivered in December 2013. "When they first pulled her out, she looked perfectly fine," her mother Jennifer told ABC News. "But she was ghost white...she had no color to her, not even pink."

When nurses attempted to prick her foot to measure oxygen levels, they could barely drain enough blood to perform the test. Hope's hemoglobin level was 3.8, far below the average of 10 to 15.

A fetal-maternal hemorrhage occurs when the placenta separates from the uterine wall and the fetus's blood drains into the mother. It is usually caused by trauma to the mother's abdomen -- of the sort that might occur in a car accident -- but occasionally it does happen spontaneously.

The first sign of such of hemorrhage is decreased fetal activity, and Hope Juarez's doctor, Marielle Nguyen, believes that her mother Jennifer's quick reaction to Hope's sudden lethargy probably saved the baby's life.

"In Hope's case," Dr. Nguyen said, "her outcome was beautiful because it was the classic textbook case they tell you about. The mom knew right away that she had a clue something was wrong. She couldn't feel the baby move. And she came in right away and we delivered the baby. If we had waited any longer, the outcome would have been different."

So far, all of Hope's developmental markers have come back normal. "She's doing everything a baby at her age should be doing," said Juarez. "She is smiling and lifting her head and eats really well."

Watch an ABC News video about the "ghost white baby" below.