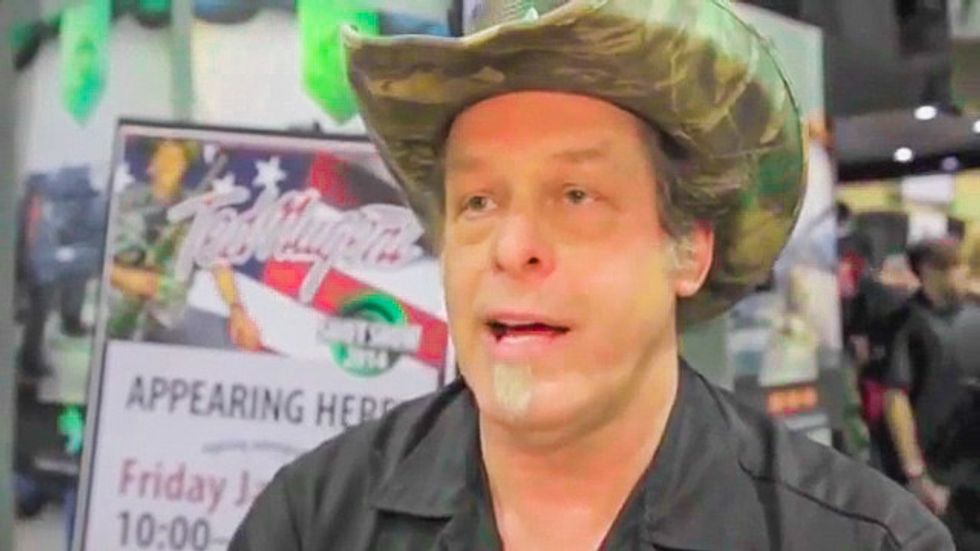 Republican Texas gubernatorial candidate Greg Abbott this week said that a Tuesday event with Ted Nugent would go on, even after Democrats reminded him of the conservative rocker's admitted history of sexual relationships with underage girls.

The Dallas Morning News noted on Monday that Abbott had campaigned on his record of protecting women against Internet predators as attorney general, but refused to cancel a Tuesday appearance with Nugent, who admitted in a 1998 VH1 documentary that he had a history with young girls.

“I was addicted to girls. It was hopeless. It was beautiful,” Nugent said at the time. “I got the stamp of approval of their parents... I guess they figured better Ted Nugent than some drug-infested punk in high school.”

“Greg Abbott has crisscrossed our state publicly promising to protect Texas women and children while he’s been making plans to appear at campaign events with an admitted sexual predator,” Angle said.

The Texas Democratic Party pointed to Nugent's more recent history of saying that he would be "dead or in jail" if President Barack Obama was re-elected, which earned him a visit from the U.S. Secret Service.

"He spews hate against our first African-American president and in return, Attorney General Greg Abbott welcomes him to the campaign trail," Texas Democratic Party chairman Gilberto Hinojosa said in a statement. "Is this how Abbott celebrates Black History Month? Texans deserve better than a statewide office holder and candidate running for governor who welcomes Ted Nugent and his repugnant comments."

For its part, Abbott's campaign said on Monday that the appearances with Nugent would not be canceled, and praised the Motor City Madman for "protecting our Constitution."

"Ted Nugent is a forceful advocate for individual liberty and constitutional rights - especially the Second Amendment rights cherished by Texans," Texans for Greg Abbott communications director Matt Hirsch wrote in a statement. "While he may sometimes say things or use language that Greg Abbott would not endorse or agree with, we appreciate the support of everyone who supports protecting our Constitution."