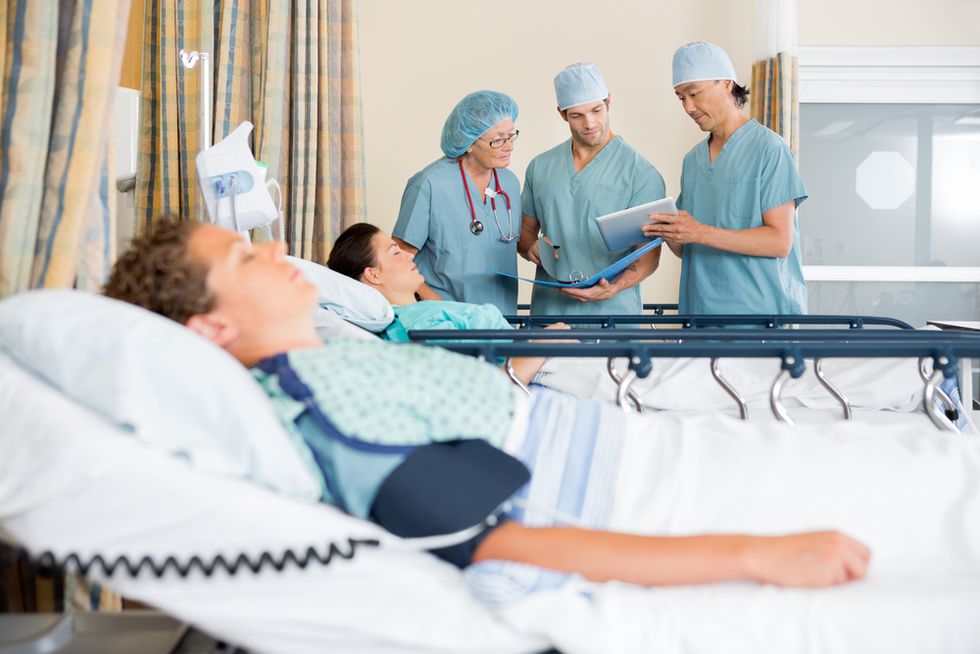 Docs and nurses at patient bedside via Shutterstock

Thousands of Americans will die as a result of red state governors' refusal to expand Medicaid and extend health coverage to their states' neediest citizens, according to a study by researchers at Harvard University and the City University of New York.

Talking Points Memo reported that as many as 17,000 people will die because they cannot afford to access health care.

Republican governors and state legislatures in 23 states have refused the supplemental funds out of political motivations, but the study authors say that this act of political sabotage will have deadly consequences.

"The results were sobering," said study author Samuel Dickman to Pennsylvania newspaper The Morning Call. "Political decisions have consequences, some of them lethal."

The study found that a projected 423,000 diabetics will not be able to adequately manage their disease. Some 659,000 women will not receive mammograms and 3.1 million will not get necessary gynecological checkups like pap smears.

The lack of early intervention and preventative care means that patients will only seek medical help when they reach the acute phase of illness, when treatment options are fewer and negative outcomes more likely.

"Low-income adults in states that have opted out of Medicaid expansion will forego gains in access to care, financial well-being, physical and mental health, and longevity that would be expected with expanded Medicaid coverage," said the study.

The Kaiser Family Foundation reported that 25 states and the District of Columbia are expanding their Medicaid programs and 23 states are not. Pennsylvania and Indiana plan to expand Medicaid in 2014, but their plans have not been finalized.

[image of doctors and nurses at patient bedside via Shutterstock.com]