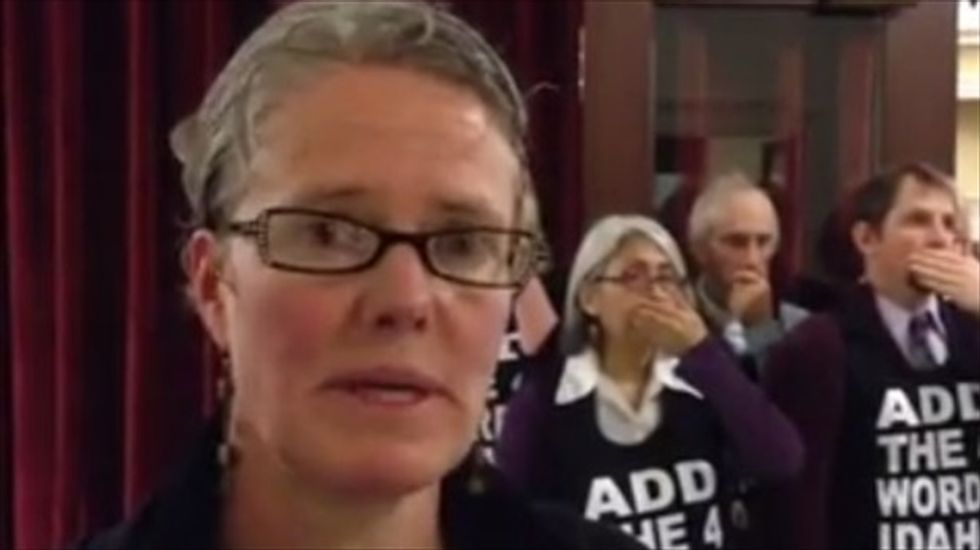 A former Idaho state Senate member was arrested and barred from the Senate chambers on Monday while leading a protest demanding workplace protections for the LGBT communities.

The Idaho Spokesman-Review reported that former Sen. Nicole LeFavour (d) wanted to use the rule that would allow her to address the Senate as a former member. LeFavour was advocating for the "Add The Four Words" campaign,, which calls for sexual orientation and gender identiity to be covered by state laws against workplace and housing discriminatoin. But lawmakers suspended the rule regarding former members simply to keep LeFavour out.

"We want to preserve the right of debate," Senate Majority Leader Mark Davis (R) was quoted as saying. "We want to have a Senate floor that recognizes the traditions of this body, and the historic dignity that we strive for on this floor."

The motion to suspend Senate Rule 46A passed unanimously, 34-0.

The Associated Press reported that LeFavour and 42 other demonstrators were arrested after blocking lawmakers' passage to the Senate chambers. She was later released.

The campaign gained momentum following state Rep. Lynn Luker's (R) introduction of a bill that would forbid the state from revoking a business' license for refusing service on religious grounds.

LeFavour also released a video showing herself and her fellow protesters before they were arrested.

"We are not leaving until lawmakers return to their committee rooms and begin the work of passing a bill to add the words and finally say in law that cruelty to gay and transgender people is wrong," she said. "If they don't, they might as well be saying it's fine, and too many people are being hurt."

Watch LeFavour's statement, as posted online by the Statesman-Review on Monday, below.