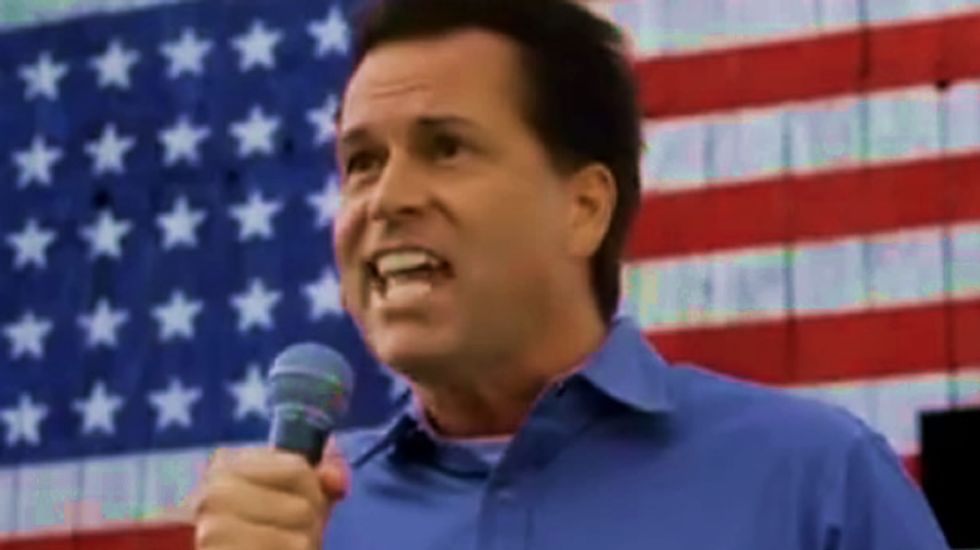 A Republican Senate candidate in Kansas claims that criticism of his posting "gruesome X-ray images of gunshot fatalities and medical injuries" on his Facebook page, then joking about them, is part of a coordinated effort "to vilify all doctors."

Dr. Michael Wolf, a radiologist and distant cousin of President Barack Obama, is running a campaign to unseat Sen. Pat Roberts (R) that is based on his professional opinion about "the horrors of the president's health-care overhaul." He even authored a book entitled First Do No Harm: The President’s Cousin Explains Why His Hippocratic Oath Requires Him to Oppose ObamaCare.

On Thursday, Tim Carpenter of the Topeka Capital-Journal interviewed Wolf about X-ray images of patients, former patients, and deceased bodies that Wolf had posted on his Facebook page.

When confronted an image of a broken leg and asked whether he had obtained permission from that patient to post the image on Facebook, Wolf responded that "every X-ray would be of a patient, is that not right? What X-ray would not be of a patient?"

"Look," Wolf continued, "if you don't identify a person, then you don't need their permission, you're aware of that."

"So if you have an image from work," Carpenter asked, "or from medical school, you can just take a picture of that on your iPhone and put it on the Internet, that's OK as long as you don't identify them?"

"If you don't identify them," Wolf said, "look at any medical textbook that's full of this kind of imaging, as long as they're not identified."

"Let's look at the context of these," Carpenter said, "because it seems like these are for humorous purposes. Do you think that's professional?"

"To educate people about what happens," Wolf replied, "is that not educational?"

Carpenter then read Wolf one of the comments he wrote to accompany an X-ray: "One of my all-time favorites, from my residency days there was a pretty active 'knife and gun club' at Truman Medical Center. What kind of gun blows somebody's head completely off? I've got to get one of those."

"What kind of medical educational [purpose] does that have?" Carpenter then asked.

"So, you know what, I'll tell you something," Wolf replied. "I'll tell you about the burden you have when you're a doctor, and you have people who come to and put their lives in their hands. And this is something that maybe most people don't understand...but this is not about trying to violate anybody's rights or privacy. This is not even of a patient of mine."

"No, it isn't," Wolf replied. "It is no joke about taking care of patients."

Carpenter then pulls out another image, of a man "murdered in Kansas City, and I believe this image was posted by you, before his funeral. Why would you do this?"

"What do you know," Wolf responded. "What, are you speculating? What is that?"

"When I see you campaigning as a healthcare professional -- your signs all say 'doctor' in front of them -- I'm asking you, professionally, is this material professional?"

"This is the kind of material you see in medical education textbooks," Wolf replied.

Carpenter then asked Wolf, point blank, whether he "still posted images of dead people on the internet."

"You know," Wolf responded, "it's so easy to try to put some kind of blame on anybody and anything that you'd like to do."

As the interview ended, Wolf demanded the copies of the images Carpenter had shown him.

When Carpenter refused, Wolf said "I'm not going to play these kinds of gotcha games" and walked away.

On Saturday, his campaign released a statement claiming that the interview was a character attack. "The attack will not only target me," the statement read, "but will, through its implications, cast a wider net to vilify all doctors. It is likely that, at [Sen. Pat] Roberts' suggestion, reporters will try to make connections that simply don’t exist. But I didn’t let an audit by Barack Obama’s IRS intimidate me, and I won’t let the desperate attacks of an entrenched career politician intimidate me either... [so Pat Roberts] acts exactly like the 47-year Washington insider he is and simply launches a character assassination against an upstanding medical doctor in Kansas."