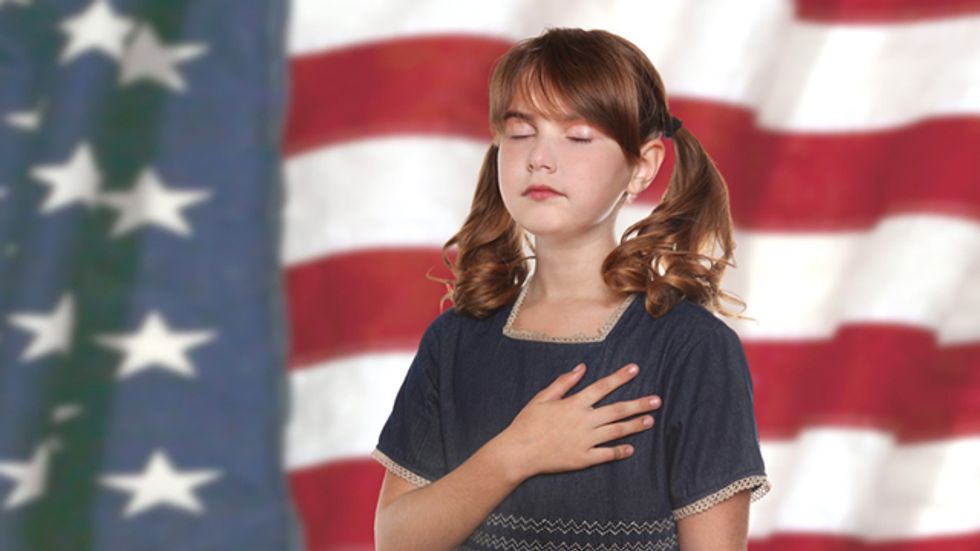 The CW network's new science fiction television show Star Crossed outraged conservative Christian viewers on Monday when it predicted that the words "under God" would no longer be in the Pledge of Allegiance in the near future.

The show, set in 2024, tells the story of a romance between a human girl named Emery and an alien boy named Roman, who has been allowed to attend her high school even though most of his fellow aliens were imprisoned in internment camps after coming to Earth.

Just minutes into the premiere episode, Emery makes her way to her first high school class, where other students are reciting the Pledge of Allegiance.

"I pledge allegiance to the Flag of the United States of America, and to the Republic for which it stands, one Nation, indivisible, with liberty and justice for all," the students say.

Although the pledged recite by the students at the futurist high school was exactly as it was written in 1892 before the words "under God" were added, conservatives on Twitter lashed out and vowed never to never watch the show again.

"Bad decision to remove 'under God' from the pledge," Twitter user Anonymous583 noted, adding the hashtags "#antiGod" and "#HollywoodLiberalsSuck."

"You forgot 'under god' in the pledge of allegiance!" Alan Thueru tweeted. "But at least you said 'English' is the language!"

A sampling of some of the tweets and the video clip from CW's Star Crossed are below.

I live in One Nation UNDER GOD, thank you very much #StarCrossed

Well I liked #StarCrossed until they left out "under God" from the pledge of allegiance. #seriously

@Zap2it @StarCrossed_CW @CWStarCrossed REALLY YOU CUT OUT "UNDER GOD" from the pledge of allegiance. Say it how it was written

And it begins already @CBSTVStudios and sadly the show removed Under God from the pledge of allegiance. #Fail #starcrossed

@theblaze New show on the CW, Star-Crossed cuts "UNDER GOD" out of Pledge of Allegiance. Guess the show is another L leaning show.

@StarCrossed_CW omitting "Under God" from the Pledge of Allegiance" is ridiculous! You just lose a viewer smh

@cwstarcrossed PISSED! I wonder how many other viewers + investors you just lost by leaving out UNDER GOD in the pledge. #starcrossed

#StarCrossed you forgot "under god" in the pledge of allegiance! But at least you said "English" is the language!

[Patriotic Child Saying Pledge of Allegiance to the Flag (Shutterstock)]