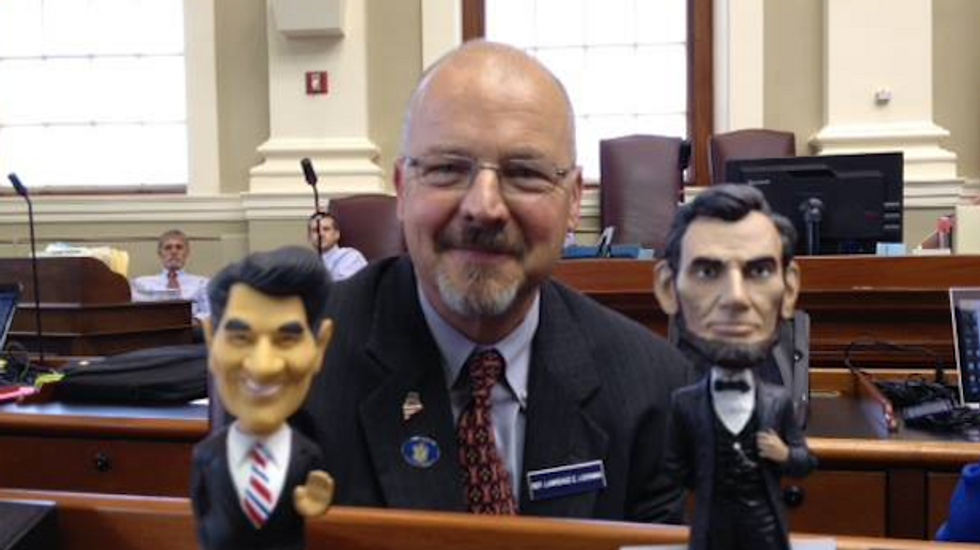 A Republican state lawmaker from Maine says he regrets making decades worth of offensive comments about gays, rape, and abortion that were compiled recently by a liberal activist.

Blogger Mike Tipping dug up several offensive comments made by state Rep. Lawrence Lockman (R-Amherst) from old news reports he posted on the Bangor Daily News website, which has spurred Democratic calls for the lawmaker’s resignation.

In one of the quotes posted on the blog, Lockman falsely suggested HIV and AIDS could be spread by bed sheets and mosquitos, and he also said the progressive movement helped spread the virus by claiming “the practice of sodomy is a legitimate alternative lifestyle, rather than a perverted and depraved crime against humanity.”

The post also quoted a 1995 press statement by Lockman, then part of the Pro Life Education Association, comparing abortion to rape.

“If a woman has (the right to an abortion), why shouldn’t a man be free to use his superior strength to force himself on a woman?” Lockman said. “At least the rapist’s pursuit of sexual freedom doesn’t (in most cases) result in anyone’s death.”

The blogger also found a 1996 article that featured Lockman dressed as a vampire outside the Federal Building in Bangor to protest the IRS and its “police-state” taxation methods.

Although most of the comments were at least 15 years old, Maine’s Democratic Party chairman asked for the lawmaker’s resignation, saying the remarks were “hateful, vicious and offensive.”

“[Lockman is a] disturbed individual who holds some of the most abhorrent beliefs ever heard from a public official in Maine,” said Ben Grant, the state’s Democratic Party chairman in a statement Tuesday.

The lawmaker issued his own statement Wednesday, saying his previous comments did not inform his public service.

“I have always been passionate about my beliefs, and years ago I said things that I regret,” Lockman said. “I hold no animosity toward anyone by virtue of their gender or sexual orientation, and today I am focused on ensuring freedom and economic prosperity for all Mainers.”

“I do not condone these or any statements that are intentionally hurtful toward others on account of race, religion, gender, or sexual orientation,” Fredette said.

Lockman is known as a divisive figure in the Statehouse who has baselessly accused colleagues of conflicts of interest and makes other outlandish statements during floor debates.