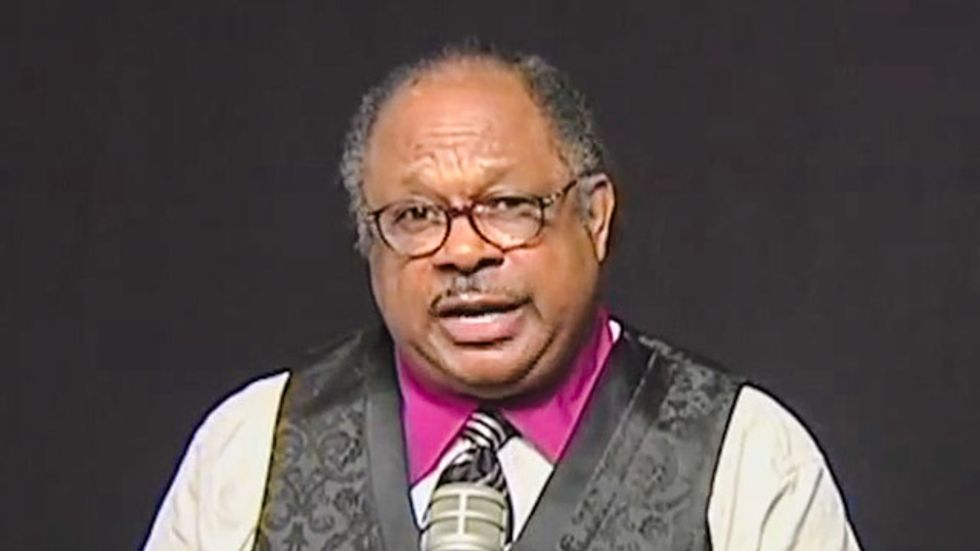 In a YouTube video posted on Tuesday, Atlah World Missionary Church Rev. James David Manning said that he had displayed the following sign outside his Harlem church: ”Obama has released the homo demons on the black man. Look out black woman. A white homo may take your man.”

"Obama has released these demons, particularly upon the black males," he explained. "This homosexual demon, hoping to influence as many black males to subscribe to ideas that homosexual perverted LGBT as possible."

"I have noticed that Obama is influencing the few black men that are left to come out of the closet -- or be homosexual -- and they are being scooped up by white homos, leaving the black woman in more dire straits and with less of a choice of a man to come and be her husband, and father her children," he said.

Manning warned that black women had the most to lose from the "white homo demons."

Manning said that the "conclusive proof" was that no "white homos" had come out in professional sports.

In conclusion, the pastor expressed support for the Ugandan and Nigerian governments' stands against homosexuality, "and the people of Africa who will not have this God-forsaken abominational [SIC], anti-creation, anti-integrity, anti-life, anti-humanity, anti-universal understanding, anti-DNA, anti-if-you-will-godliness established in our nation by this pervert, this son of Satan, Barack Hussein Obama."

"But his powers continue."

Last year, Manning accused the president of having a "love child" and then shooting the mother outside the White House. He has also alleged that Obama traded gay sex for cocaine while a teenager.

Watch the video below from ATLAHWorldwide, broadcast Feb. 25, 2014.