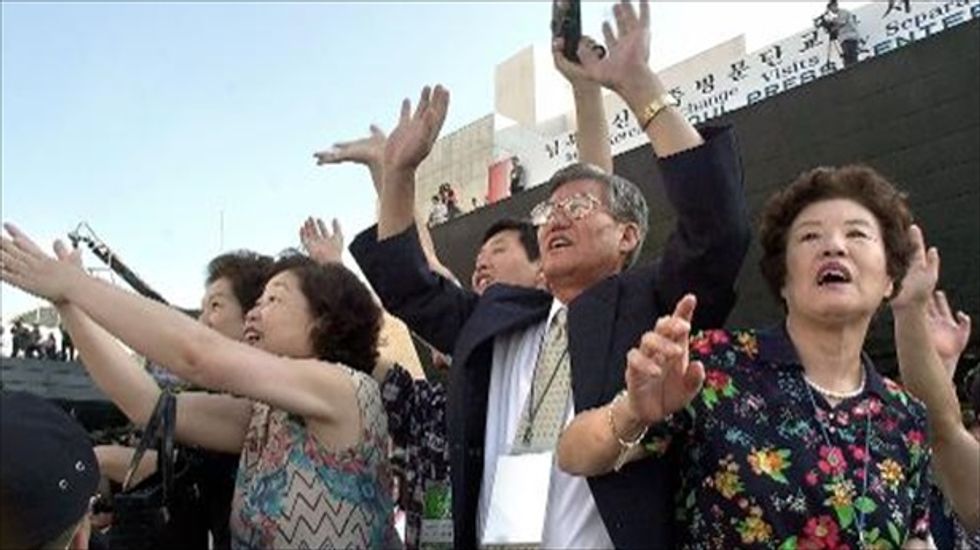 South Koreans wave goodbye from behind a police line to family members who visited from the North in family reunions in Seoul on Aug. 18, 2000 [AFP]

Rare talks between the rival Koreas ended on an even rarer note of agreement Friday, allowing an under-threat reunion for divided families to go ahead and fuelling hopes of further constructive engagement.

The agreement pointed to a significant concession by North Korea which had strenuously objected to annual South Korean-US military drills that would overlap with the February 20-25 reunion for family members separated by the Korean War.

The North had pushed the South to postpone the start of the exercises, but Seoul refused, insisting that the two issues -- one humanitarian and one military -- could not be linked.

"Agreement was reached after North Korea accepted our position that the family reunion event is important... as the first step to build trust" said South Korea's chief delegate Kim Kyou-Hyun.

The talks on Wednesday and Friday were the highest-level official contact between the two Koreas for seven years, and the fact they ended as they did will be seen as a significant step forward.

As well as ensuring the reunion would take place as planned, the two sides agreed to stop trading verbal insults and to continue their nascent dialogue.

"I wouldn't describe it as a major breakthrough, but it does open the door to possible cooperation and improved relations," said Kim Yong-Hyun, a North Korean expert at Seoul's Dongguk University.

The talks were the first substantive follow-up to statements by the leaders of both countries -- South Korean President Park Geun-Hye and the North's Kim Jong-Un -- professing a desire for improved inter-Korean ties.

There had already been signs of a shift in the North's position at Wednesday's first round, when it demanded the military drills be postponed -- a change from its usual position that they be cancelled entirely.

Seoul's unequivocal rejection of any change to the drills' schedule because of the family reunion had been lent extra clout on Thursday by visiting US Secretary of State John Kerry.

Addressing a press briefing in Seoul, Kerry urged Pyongyang to act with "human decency" and not try to use "one (issue) as an excuse to somehow condition the other".

- 'A lot of thorny issues remaining' -

In a statement a spokesperson for UN Secretary General said Ban Ki-moon welcomed the agreement.

"Tension between the two Koreas has been high and inter-Korean relations have remained strained for far too long. As such, this important development is a step in the right direction," the spokesperson said.

The statement added that Ban had pressed North Korean officials during a recent meeting in Sochi that Pyongyang should "decouple humanitarian matters, such as family reunions, from political and security matters".

Millions of Koreans were separated by the 1950-53 war, and the vast majority have since died without having had any communication at all with surviving relatives.

Up to 73,000 South Koreans are wait-listed for a chance to take part in one of the reunion events, which select only a few hundred participants at a time.

The planned event this month will see around 180 relatives reunited.

While most analysts viewed the outcome of the talks as positive, several warned that implementing the agreement could still be challenging.

Chang Yong-Seok, a senior researcher at Seoul National University's Institute for Peace and Unification, said hawkish elements of the North Korean military would be unhappy with the apparent concession over the South-US exercises.

"And the no-slander clause could prove problematic, as the North believes the South Korean media should be bound by it, which of course it isn't," Chang said.

"There are a lot of thorny issues remaining," he added.

Having agreed to let the reunion take place as scheduled, the North will, observers said, be wanting to see some reciprocal benefit.

Pyongyang has been pressing Seoul for some time to resume regular trips by South Korean tourists to Mount Kumgang.

The tours, a source of much-needed hard currency for the North -- were suspended by the South after a tourist was shot dead by North Korean guards in 2008.

"North Korea will be looking for some movement on the Kumgang tours now, and maybe on food and economic assistance as well," said Dongguk University's Kim.

Kerry left for China on Friday morning following his brief stop in Seoul, where he had focused on efforts to curb North Korea's nuclear weapons programme with Park and other officials.

While welcoming the North-South talks, Kerry stressed that Washington was not ready to accede to Pyongyang's demand that it get involved in direct negotiations.

"We've been through that exercise previously, we want to know that this is real," he said, adding North Korea had to take "meaningful action" towards denuclearisation before a dialogue could begin.

"The US will not accept talks for the sake of talks," he said.