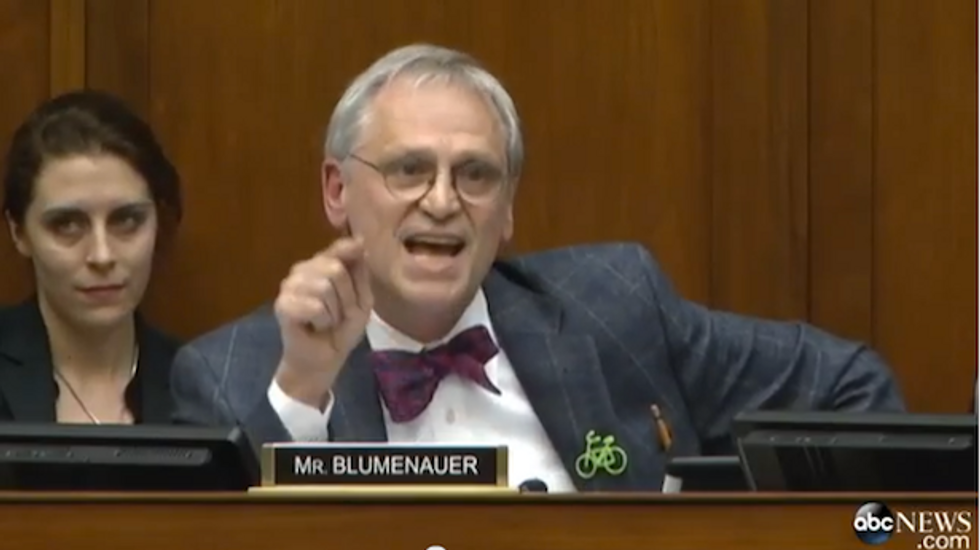 An Oregon Democrat literally threw up his hands in frustration Tuesday after failing to get a direct answer to his question about marijuana’s dangers from the deputy director of the White House Office of National Drug Control Policy.

“To my knowledge, I don’t know if there have been instances of specific overdose-related deaths,” Botticelli said.

Blumenauer then asked the drug official in a House Oversight Committee hearing to identify whether marijuana was more dangerous and addictive than cocaine or methamphetamines.

“I don’t think that anyone would dispute the fact that there’s relative toxicity related to those drugs,” said Botticelli, who reluctantly admitted during the same hearing that marijuana was less dangerous than alcohol.

But the lawmaker wasn’t satisfied, asking Botticelli again whether marijuana was more dangerous than the other two illegal drugs.

“I think the conversation minimizes the harm,” Botticelli said.

That’s where the conversation turned testy.

“I’m not trying to minimize the harm,” Blumenauer said. “I just want to know what’s more dangerous and addictive. You don’t know?”

“As a public health person, one of the things that we look at is not the relative risk of one drug against another,” Botticeli said as the lawmakers’ face clouded over.

“Let me just say that your equivocation right there, being unable to answer something clearly and definitively when there is unquestioned evidence to the contrary, is why young people don’t believe the propaganda, why they think it’s benign,” Blumenauer said.

“If a professional like you can’t answer clearly that meth is more dangerous than marijuana -- which every kid on the street knows, which every parent knows -- if you can’t answer that, maybe that’s why we’re failing to educate people about the dangers,” the lawmaker said. “I don’t want kids smoking marijuana; I agree with the chairman. But if the deputy director of the office of drug policy can’t answer that question, how do you expect high school kids to take you seriously?”

Botticelli assured the congressman he hadn’t meant to be disrespectful or suggest there was no difference in toxicity between the three illegal drugs, but Blumenauer threw up his hands.

“I asked what was more dangerous; you couldn’t answer it,” Blumenauer said. “And I just want to say that you, sir, represent what’s part of the problem.”

The congressman cited statistics showing the dramatic decline in legal tobacco use as compared to illegal marijuana usage rates.

“We’ve been able to drop tobacco use without being coercive, we’ve been using fact-based advertising and we focused our efforts on things that matter rather than things that don’t work,” said Blumenauer, who believes the federal government should permit states to legalize marijuana.

“I’d respectfully suggest that you and the department take a step back if you’re concerned that somehow people think marijuana is benign, part of the reason is that drug professionals can’t communicate in ways the rest of America does,” the congressman said.