Pat Robertson: Eric Holder 'elevated' sodomy over the Constitution, so impeach him 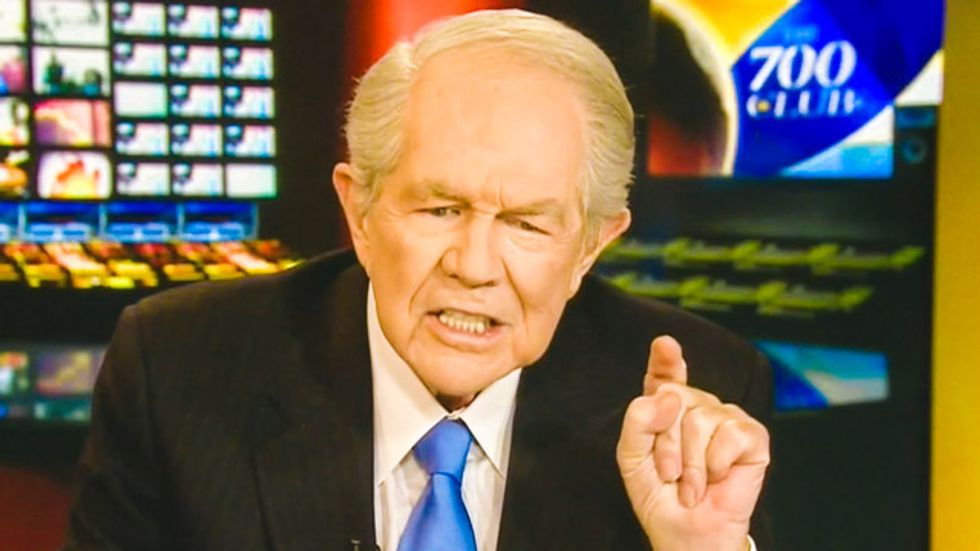 Televangelist Pat Robertson was visibly angry on Wednesday as his called for Attorney General Eric Holder to be impeached because, he said, the "sodomy" rights of homosexuals had been elevated above everyone else.

At the National Association of Attorneys General Winter Meeting (NAAG) earlier this week, Holder said told state attorneys general that they did not need to enforce state-level bans on marriage equality if they felt those law were unconstitutional.

After listening to the report, Robertson was livid on Wednesday.

"The House should impeach Holder," he said, mentioning the so-called "Fast and Furious" and IRS scandals. "Eric Holder should be impeached!"

"The House wants to impeach him, they've talked about impeaching him," the televangelist continued. "Of course, that wouldn't be upheld in the Senate, I imagine, because they are Democrat controlled, But nevertheless, there should be movement of impeachment in the House and he should resign."

As Robertson continued speaking about Holder and homosexuality, his rage became apparent.

"The idea of telling attorneys general you don't have to abide by the laws of you state -- except in extraordinary circumstances -- who gave them the authority?" he asked. "These laws have been passed! These are referendum of the majority of the people of the state, upheld by the courts in the state. And he's telling the attorneys general, you don't have to enforce those laws? Nonsense!"

"And what we're seeing now, more and more, the rights of homosexuals - the practice of Homo.Sex.U.Al.Ity, sodomy, consensual sodomy -- is being being raised and elevated above the rights of religious believers," the TV preacher ranted, pointing his finger at the camera. "And that is terrible!"

"The fundamental articles in our Constitution, in the Declaration of Independence is our right of religion. Congress shall pass no law respecting the establishment of religion or prohibiting the free exercise thereof."

But Robertson insisted that laws like Arizona's proposed SB 1062, which would allow businesses to discriminate against LGBT people, had "nothing to do with limiting homosexuals."

"It has to do with giving religious people the right to practice their religion freely," he concluded.