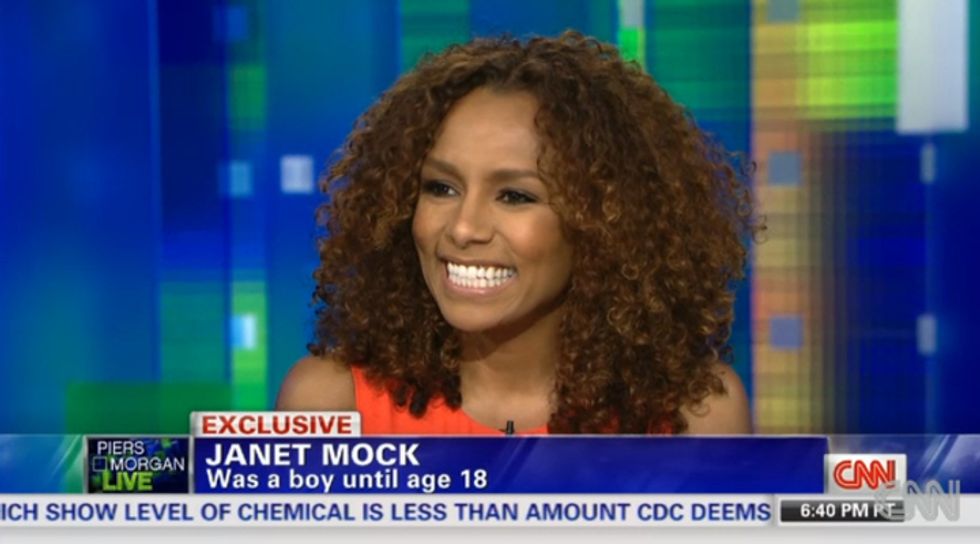 CNN host Piers Morgan erupted at a transgender guest after she complained that he had sensationalized her story in an appearance on his program. Media Matters reported that Morgan took to Twitter to denounce trans activist Janet Mock, who appeared on "Piers Morgan Tonight" on Tuesday, Feb 4.

Luke Brinker at Media Matters opined that Morgan seems to be offering a lesson for media figures in "how not to treat transgender subjects." During the interview with Mock, Morgan made the mistake of mixing up gender and sex.

Mock, Morgan said, "was a boy" until the age of 18. In greeting Mock and welcoming her to the show, the host told Mock he would never have guessed "you had ever been a boy."

While Mock may have been biologically male prior to transitioning, transgender people emphasize to the cisgendered (people who are born into bodies that do not cause them to experience gender dysphoria) that their gender and their biological sex are incongruent, hence the need to transition. So, Mock said, to call her "a boy" prior to her transitioning process is "reductive" and shows a profound lack of understanding on Morgan's part.

Mock gave an interview to Buzzfeed after the CNN appearance in which she complained that Morgan had "sensationalized" her story and objectified her body, acting as if surgery were absolutely required to make a trans woman into a woman.

“He’s trying to do info-tainment,” Mock told BuzzFeed. “He doesn’t really want to talk about trans issues, he wants to sensationalize my life and not really talk about the work that I do and what the purpose of me writing this book was about.”

Mock is the author of Redefining Realness, a look at gender, sex, and sexuality in society.

Morgan fired off several irate tweets, feeling ill-served by the backlash from Mock and other transgender rights supporters.

I've never been subjected to the kind of nonsense that @janetmock and her supporters are accusing me of now...wish I'd never booked her.

As for all the enraged transgender supporters, look at how STUPID you're being. I'm on your side, you dimwits. @janetmock

I'll deal with you tomorrow night on air @janetmock - never been treated in such a disgraceful manner. Be proud.

Watch Mock's appearance on CNN, embedded in two parts below: